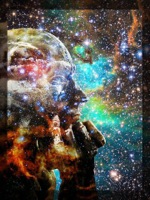 Throughout history, there have been many renditions of universal unity, connectivity, and the spectrum of considered possibility of mankind. The idea bears similarity to the ancient Buddhist concept of Indra's net, Teilhard de Chardin's conception of the noosphere, Hegel's Absolute idealism, Satori in Zen, and to some traditional pantheist beliefs.

Bucke's work entitled Cosmic Consciousness: A Study in the Evolution of the Human Mind is the title of his 1901 book. In it, Bucke developed a theory involving three stages in the development of consciousness: the simple consciousness of animals; the self-consciousness of the mass of humanity (encompassing reason, imagination, etc.); and cosmic consciousness — an emerging faculty and the next stage of human development.

Alexander Zelitchenko in his "Svet Zhizni" (Light of Life, History of Humankind in Psychosphere of Earth) continues this line, joined the directions of thought of Oswald Spengler, Lev Vygotsky, Lev Gumilev, and Carl Jung tracing the transformations of human consciousness in course of history.

Some modern psychologists and theologians make specific reference to Bucke’s work. They include Carl Jung, Erich Fromm, Robert de Ropp, and Abraham Maslow. Others who have used the concept of cosmic consciousness, as introduced by Bucke in 1901, include Albert Einstein, Pierre Teilhard de Chardin, and Alan Watts.[1]