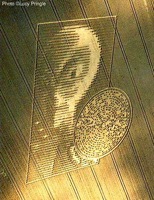 Crop circles are patterns created by the flattening of crops such as wheat, barley, rye, or corn, and the term itself Crop circle is a new term that entered the Oxford English Dictionary in 1990.

Doug Bower and Dave Chorley claimed to have started the crop circle phenomenon in 1978[1] and were awarded an Ig Nobel Prize in 1992 for their crop circle hoaxing. Their work was continued by other groups of crop circle makers such as the circlemakers arts collective[2] founded by John Lundberg in the early 1990s.

There is no compelling evidence that crop circles are anything but man-made hoaxes or works of art. Nevertheless various alternative hypotheses have been offered to explain the formation of crop circles such as the paranormal. It has also been suggested that ball lightning and vortices in the wind might rarely produce isolated indentations in crops.[1]

For lessons on the topic of Crop Circles, follow this link.

Crop circles are one of the most profound and mysterious phenomena of the modern age. Are they a communication from extra-terrestrials? Evidence of other dimensions or a catalyst to advancing our way of thinking?

Governments have discussed them and then sought to confuse and misinform the populace through their control and manipulation of the popular media. The military have endangered life and safety in order to investigate and monitor crop formations, yet they deny involvement. Hollywood has sought to manipulate the truth and credibility of scientific evidence and facts, yet film goers become ever more intrigued. Hoaxers have sought to deceive, confuse and muddy research waters, in the same way that computer virus writers seek attention and attempt to contaminate data.

Some crop circles are hoaxed. Some are not. We research those that are not![2]