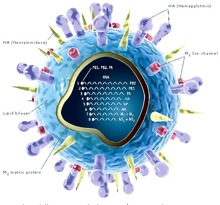 A virus (from the Latin virus meaning toxin or poison) is a microscopic infectious agent that can reproduce only inside a host cell. Viruses infect all types of organisms: from animals and plants, to bacteria and archaea.[1] Since the initial discovery of tobacco mosaic virus by Martinus Beijerinck in 1898,[2] more than 5,000 types of virus have been described in detail,[3] although most types of virus remain undiscovered.[4] Viruses are ubiquitous, as they are found in almost every ecosystem on Earth,[5] and are the most abundant type of biological entity on the planet.[6] The study of viruses is known as virology, and is a branch of microbiology.

Viruses consist of two or three parts: all viruses have genes made from either DNA or RNA, long molecules that carry genetic information; all have a protein coat that protects these genes; and some have an envelope of fat that surrounds them when they are outside a cell. Viruses vary in shape from simple helical and icosahedral shapes, to more complex structures. They are about 1/100th the size of bacteria.[7] The origins of viruses in the evolutionary history of life are unclear: some may have evolved from plasmids—pieces of DNA that can move between cells—while others may have evolved from bacteria. In evolution, viruses are an important means of horizontal gene transfer, which increases genetic diversity.[8]

Viruses spread in many ways; plant viruses are often transmitted from plant to plant by insects that feed on sap, such as aphids, while animal viruses can be carried by blood-sucking insects. These disease-bearing organisms are known as vectors. Influenza viruses are spread by coughing and sneezing, and others such as norovirus, are transmitted by the faecal-oral route, when they contaminate hands, food, or water. Rotaviruses are often spread by direct contact with infected children. HIV is one of several viruses that are transmitted through sexual contact.

Not all viruses cause disease, as many viruses reproduce without causing any obvious harm to the infected organism. Viruses such as hepatitis B can cause life-long or chronic infections, and the viruses continue to replicate in the body despite the hosts' defense mechanisms. In some cases, these chronic infections might be beneficial as they might increase the immune system's response against infection by other pathogens.[9] However, in most cases viral infections in animals cause an immune response that eliminates the infecting virus. These immune responses can also be produced by vaccines that give lifelong immunity to a viral infection. Microorganisms such as bacteria also have defenses against viral infection, such as restriction modification systems. Antibiotics have no effect on viruses, but antiviral drugs have been developed to treat both life-threatening and more minor infections.[1]