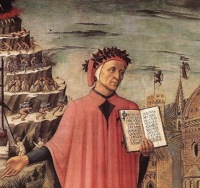 For lessons on the topic of Dante, follow this link.

In Italy he is known as il Sommo Poeta ("the Supreme Poet") or just il Poeta. Dante, Petrarch, and Boccaccio are also known as "the three fountains" or "the three crowns". Dante is also called the "Father of the Italian language".[1]