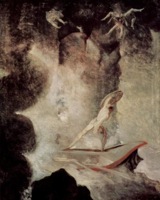 An epic is traditionally a genre of poetry, known as epic poetry. However in modern terms, epic is often extended to other art forms, such as novels, theater and film, where the story is centered on heroic characters, and the action takes place on a grand scale, just as in epic poetry. Epics in this sense are majestic depictions that capture impressive struggles, such as stories of war, adventures, and other efforts of great scope and size over long periods of time. The real life stories of heroic figures have also been referred to as being epic. Examples of notable epics include Ernest Shackleton's exploration adventures in Antarctica, historical novels such as War and Peace.

An epic (from the Ancient Greek adjective ἐπικός (epikos), from ἔπος (epos) "word, story, poem") is a lengthy narrative poem, ordinarily concerning a serious subject containing details of heroic deeds and events significant to a culture or nation. Oral poetry may qualify as an epic, and Albert Lord and Milman Parry have argued that classical epics were fundamentally an oral poetic form. Nonetheless, epics have been written down at least since Homer, and the works of Vyasa, Virgil, Dante Alighieri and John Milton would be unlikely to have survived without being written down. The first epics are known as primary, or original, epics. One such epic is the Anglo-Saxon story Beowulf. Epics that attempt to imitate these like Virgil's Aeneid and Milton's Paradise Lost are known as literary, or secondary, epics. Another type of epic poetry is epyllion (plural: epyllia) which is a brief narrative poem with a romantic or mythological theme. The term, which means 'little epic', came in use in the nineteenth century. It refers primarily to the type of erotic and mythological long elegy of which Ovid remains the master; to a lesser degree, the term includes some poems of the English Renaissance, particularly those influenced by https://en.wikipedia.org/wiki/Ovid Ovid]. One suggested example of classical epyllion may be seen in the story of Nisus and Euryalus in Book IX of Aeneid.[1]