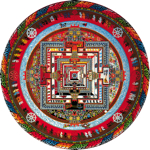 Tala is the rhythmic art that teaches the coordination of simple gestures in space and time. In "The Subconscious Language of Musical Time" (1979), Lewis Rowell explains that Tal “derives from a physical metaphor: the Indo-European root *TEL means a broad flat surface, and the Sanskrit tala signifies an action applied” to this rhythmizomenon by physical actions called kriyas (p. 100). Practitioners trained in tala coordinate gestures (kriyas) of dividing time (kalā), attunment to “becoming time” (kāla), and the tempo maintaing by the time of rests (laya) produce visceral sonic effects through flow and the cutting of flow, both “continuity and reticulation,” (p. 98). In other wyrds, laya is another word for rhythm. If a percussionist and a sitarist are to achieve laya, both artists must be able to rhythmically alternate and coordinate cutting/striking gestures with opening/flowing gestures. Compositional activity proceeds only by distributing and coordinating acts of sounding out and periods of rest. The art of combining sounding kriyas (compose) with silent kriyas (repose) renders, in percussion and dance, physical models of the distributed consciousness of avatar-awareness. In wiki, the repetitions of Greek compositional theory (Aristedes' “art of combining rhythmic patterns,” ) and the repetitions of Tal can be more dramatically distributed and create another order of "opening," where the individuated and the shared go into a mix. Rhythm's ability to distribute the complex interiority produced by dense information flows (in/out, open/close LINK FELA KUTI) would seem to produce what Pierre Teilhard de Chardin has called a "crisis" of "psychic decomposition." (Future of Man 139). However, laya's etymology provides wyrd strands that suggest that this dissipation of ego has always been a dissolving, not into nihilism, but into a commons. Therefore, de Chardin reminds us, so-called ego-loss, "provided it be accompanied by a revival of the phyletic sense" is in fact the "true instrument" for the "collectivisation of Earth" (Future of Man 141). The entrainment of logos-centric patterns transforms writing classrooms into such instruments of commons-formation, which participants tune and retune constantly in an ongoing renewal of evolutionary practices of composition forged at the nexus of wryd and flesh. Such are the repetitions of the informatic revival meetings our expanded classrooms will host, and the "wildness" wikis will initiate.

In Leibniz and Huxley's repetious history, we can trace the periodic and dynamic weaving of consciousness and body; individual and collective, sacred and secular, mundane and sublime all intertwine on this warp and woof. Lewis Rowell (1979) suggests that in Indian literature, cosmogenies also proceed cyclically (LINK TO REPETIOUS HISTORY/PERENNIAL PHILOSOPHY]: primal matter is split and differentiated, and, after distribution and arrangement, is maintaned or held open in ordered time, then melted, or dissolved back into matter. “ Kalā is connected with the first phase by its function as that which divides,” or cuts, “ Kāla is similarly connected with the second phase, that of motion maintained” or held in balanced equipoise (samya) “in ordered time; and laya,” the space between the beats, the rests that determine the tempo and leave a sequence open for interuption, collobaration, and transformation through rhythm, involves “the dissolution back into elemental matter” (p. 100). Similarly, Govinda tells us that adepts training in the art of Tibetan Buddhist meditation must weave the productive phase of meditation, sristi-krama, with "the process of dissolving, of integration" known as laya-krama (Foundations of Tibetan Mysticism 105).

"The instrument of human consciousness, like a musical instrument has to be tuned anew continually, and this tuning depends on the knowledge of right vibrations, on the capacity of perceiving their relationship, which requires a high degree of sensitivity and devotion" (Foundations of Tibetan Mysticism 107). The Kalachakra system, presents space as a supporting element, "not as total nothingness, but as a medium of 'empty particles,' or 'space particles," by The Fourteenth Dalai Lama's reading of Buddhist cosmology. "This space element is the basis for the evolution and dissolution of the four elements, which are generated from it and absorbed back into it" (The Universe in A Single Atom 85). Even though "space, with its empty particles, is the basis for the whole process" of evolution and dissolution, The Dalai Lama allows that "the term particle is perhaps not appropriate when referring to these phenomena, since it implies already formed material realities" in a description that posits the basic elements as potentialities (86). \"Unforutnately, there is little description in the texts to help define space particles further\" (86).

For millenia, Kal -ā Kāla -Laya has guided rhythmic arts in sound and dance, just as rhythmic crystalization and dissolution that unfold in the repetitions of mantra has directed the noospheric practice of countless generations. Today, this rhythmic compound can help us regulate the arses and theses of text-heavy information, as well. Placed alongside Quintilian's advice to the would be vir-boni of Rome, Govinda's musical and rhythmic vision of collective attunement resounds as a rhetorical sutra for the information age. "De-Composition" tropes the pragmatic decorum and delivery strategies of Cicero's De Oratore towards a playful but equally pragmatic principle of participation.

Reading and writing rhetorically necessarily involves practices of laya “by which we combine the rhythms with one another,” but only according to kairos time, that is, only “if it should be necessesary in some degree" (Aristides "On Music" 102). In logos-centric wiki collectives, where the alternations between composing and reposing provide the basis of rhythmic training (rhythmic entraining) and fine-tune our capacities for creating and inhabiting dynamic interconnected space, the network determines the tempo, or laya, of our rhetorical choices. Working cyclically, participants learn when to listen, where to listen, and for how long, and, then, again, what and how to select. Put another way, THE RESONANCE IS THE COMPOSER. Just as mantra is a "mind tool," rhythmic rhetorics work on wikis, rendering them into learning tools.