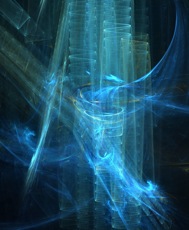 Descending Sons of God have high and divine origins. They are dedicated to the descending ministry of service on the worlds and systems of time and space, there to facilitate the progress in the Paradise climb of the lowly creatures of evolutionary origin--the ascending sons of God. Of the numerous orders of descending Sons, seven will be depicted in these narratives. Those Sons who come forth from the Deities on the central Isle of Light and Life are called the Paradise Sons of God and embrace the following three orders:

The remaining four orders of descending sonship are known as the Local Universe Sons of God:

For lessons on the topic of Descending Sons, follow this link.

Melchizedeks are the joint offspring of a local universe Creator Son, Creative Spirit, and Father Melchizedek. Both Vorondadeks and Lanonandeks are brought into being by a Creator Son and his Creative Spirit associate. Vorondadeks are best known as the Most Highs, the Constellation Fathers; Lanonandeks as System Sovereigns and as Planetary Princes. The threefold order of Life Carriers is brought into being by a Creator Son and Creative Spirit associated with one of the three Ancients of Days of the superuniverse of jurisdiction. But the natures and activities of these Local Universe Sons of God are more properly portrayed in those papers dealing with the affairs of the local creations.

The Paradise Sons of God are of threefold origin: The primary or Creator Sons are brought into being by the Universal Father and the Eternal Son; the secondary or Magisterial Sons are children of the Eternal Son and the Infinite Spirit; the Trinity Teacher Sons are the offspring of the Father, Son, and Spirit. From the standpoint of service, worship, and supplication the Paradise Sons are as one; their spirit is one, and their work is identical in quality and completeness.

As the Paradise orders of Days proved to be divine administrators, so have the orders of Paradise Sons revealed themselves as divine ministers--creators, servers, bestowers, judges, teachers, and truth revealers. They range the universe of universes from the shores of the eternal Isle to the inhabited worlds of time and space, performing manifold services in the central and superuniverses not disclosed in these narratives. They are variously organized, dependent on the nature and whereabouts of their service, but in a local universe both Magisterial and Teacher Sons serve under the direction of the Creator Son who presides over that domain.

The Creator Sons seem to possess a spiritual endowment centering in their persons, which they control and which they can bestow, as did your own Creator Son when he poured out his spirit upon all mortal flesh on Urantia. Each Creator Son is endowed with this spiritual drawing power in his own realm; he is personally conscious of every act and emotion of every descending Son of God serving in his domain. Here is a divine reflection, a local universe duplication, of that absolute spiritual drawing power of the Eternal Son which enables him to reach out to make and maintain contact with all his Paradise Sons, no matter where they may be in all the universe of universes.

The Paradise Creator Sons serve not only as Sons in their descending ministrations of service and bestowal, but when they have completed their bestowal careers, each functions as a universe Father in his own creation, while the other Sons of God continue the service of bestowal and spiritual uplifting designed to win the planets, one by one, to the willing recognition of the loving rule of the Universal Father, culminating in creature consecration to the will of the Paradise Father and in planetary loyalty to the universe sovereignty of his Creator Son.

In a sevenfold Creator Son, Creator and creature are forever blended in understanding, sympathetic, and merciful association. The entire order of Michael, the Creator Sons, is so unique that the consideration of their natures and activities will be reserved to the next paper in this series, while this narrative will be chiefly concerned with the two remaining orders of Paradise sonship: the Magisterial Sons and the Trinity Teacher Sons.[1]