From Nordan Symposia
(Redirected from Descends)
Jump to navigationJump to search 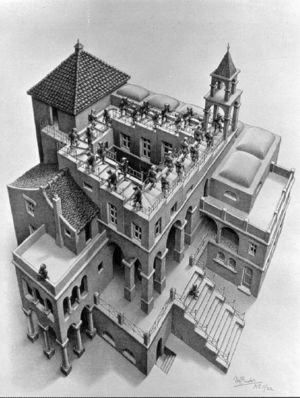 Charles Darwin proposed the theory of universal common descent through an evolutionary process in On the Origin of Species, saying, "There is a grandeur in this view of life, with its several powers, having been originally breathed into a few forms or into one".

In The Ancestor's Tale, Richard Dawkins coined the word concestor, as a substitute for common ancestor or most recent common ancestor. This new word is very gradually entering scientific parlance.

Descent and the family

Descent, like family systems, is one of the major concepts of anthropology. Cultures worldwide possess a wide range of systems of tracing kinship and descent. Anthropologists break these down into simple concepts about what is thought to be common among many different cultures.

In a society which reckons descent bilaterally (bilineal), descent is reckoned through both father and mother, without unilineal descent groups. Societies with the Eskimo kinship system, like the Eskimo proper, are typically bilateral. The egocentrid kindred group is also typical of bilateral societies.

Some societies reckon descent patrilineally for some purposes, and matrilineally for others. This arrangement is sometimes called double descent. For instance, certain property and titles may be inherited through the male line, and others through the female line.

Societies can also consider descent to be ambilineal (such as Hawaiian kinship) where offspring determine their lineage through the matrilineal line or the patrilineal line.