From Nordan Symposia
(Redirected from Deserted)
Jump to navigationJump to search 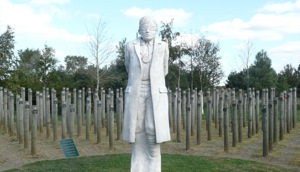 b. ‘Spiritual despondency: a sense of the dereliction of God’ (Johnson).

In military terminology, desertion is the abandonment of a "duty" or post without permission and is done with the intention of not returning. "Absence Without Leave" (AWOL) can refer to either desertion or a temporary absence.

Under international law, ultimate "duty" or "responsibility" is not necessarily always to a "Government" nor to "a superior," as seen in the fourth of the Nuremberg Principles, which states:

"The fact that a person acted pursuant to order of his Government or of a superior does not relieve him from responsibility under international law, provided a moral choice was in fact possible to him."

This Nuremberg Principle of "moral choice," "morality," or "conscience" being the higher authority was subsequently formulated into International Law by the United Nations as we see in this quote:

"Under UN General Assembly Resolution 177 (II), paragraph (a), the International Law Commission was directed to 'formulate the principles of international law recognized in the Charter of the Nuremberg Tribunal and in the judgment of the Tribunal.'"