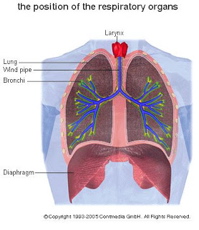 b : a transverse septum in a plant stem

In the anatomy of mammals, the thoracic diaphragm, or simply the diaphragm (Ancient Greek: διάφραγμα diáphragma "partition"), is a sheet of internal skeletal muscle that extends across the bottom of the rib cage. The diaphragm separates the thoracic cavity (heart, lungs & ribs) from the abdominal cavity and performs an important function in respiration: as the diaphragm contracts, the volume of the thoracic cavity increases and air is drawn into the lungs. A "diaphragm" in anatomy can refer to other flat structures such as the urogenital diaphragm or pelvic diaphragm, but "the diaphragm" generally refers to the thoracic diaphragm. Other vertebrates such as amphibians and reptiles have diaphragm-like structures, but important details of the anatomy vary, such as the position of lungs in the abdominal cavity.

In optics, a diaphragm is a thin opaque structure with an opening (aperture) at its center. The role of the diaphragm is to stop the passage of light, except for the light passing through the aperture. Thus it is also called a stop (an aperture stop, if it limits the brightness of light reaching the focal plane, or a field stop or flare stop for other uses of diaphragms in lenses). The diaphragm is placed in the light path of a lens or objective, and the size of the aperture regulates the amount of light that passes through the lens. The centre of the diaphragm's aperture coincides with the optical axis of the lens system.

Most modern cameras use a type of adjustable diaphragm known as an iris diaphragm, and often referred to simply as an iris. See the articles on aperture and f-number for the photographic effect and system of quantification of varying the opening in the diaphragm.