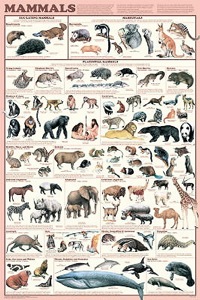 1 : any of a class (Mammalia) of warm-blooded higher vertebrates (as placentals, marsupials, or monotremes) that nourish their young with milk secreted by mammary glands, have the skin usually more or less covered with hair, and include humans

Mammals are divided into three main infraclass taxa depending how they are born. These taxa are: monotremes, marsupials and placentals. Except for the five species of monotremes (which lay eggs), all mammal species give birth to live young. Most mammals also possess specialized teeth, and the largest group of mammals, the placentals, use a placenta during gestation. The mammalian brain regulates endothermic and circulatory systems, including a four-chambered heart.

Mammals are divided into two subclasses: the Prototheria, which includes the oviparous monotremes, and the Theria, which includes the placentals and live-bearing marsupials. Most mammals, including the six largest orders, belong to the placental group. The three largest orders, in descending order, are Rodentia (mice, rats, porcupines, beavers, capybaras, and other gnawing mammals), Chiroptera (bats), and Soricomorpha (shrews, moles and solenodons). The next three largest orders include the Carnivora (dogs, cats, weasels, bears, seals, and their relatives), the Cetartiodactyla (including the even-toed hoofed mammals and the whales) and the Primates to which the human species belongs. The relative size of these latter three orders differs according to the classification scheme and definitions used by various authors.

Phylogenetically, Mammalia is defined as all descendants of the most recent common ancestor of monotremes (e.g., echidnas and platypuses) and therian mammals (marsupials and placentals).[2] This means that some extinct groups of "mammals" are not members of the crown group Mammalia, even though most of them have all the characteristics that traditionally would have classified them as mammals. These "mammals" are now usually placed in the unranked clade Mammaliaformes.

The mammalian line of descent diverged from an amniote line at the end of the Carboniferous period. One line of amniotes would lead to reptiles, while the other would lead to synapsids. According to cladistics, mammals are a sub-group of synapsids. Although they were preceded by many diverse groups of non-mammalian synapsids (sometimes misleadingly referred to as mammal-like reptiles), the first true mammals appeared in the Triassic period. Modern mammalian orders appeared in the Palaeocene and Eocene epochs of the Palaeogene period.[1]