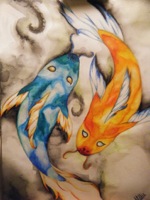 b : a system of branching in which the main axis forks repeatedly into two branches
c : branching of an ancestral line into two equal diverging branches

A dichotomy is any splitting of a whole into exactly two non-overlapping parts, meaning it is a procedure in which a whole is divided into two parts. It is a partition of a whole (or a set) into two parts (subsets) that are:

Such a partition is also frequently called a bipartition.

The two parts thus formed are complements. In logic, the partitions are opposites if there exists a proposition such that it holds over one and not the other.

The above applies directly when the term is used in mathematics, philosophy, literature, or linguistics. For example, if there is a concept A, and it is split into parts B and not-B, then the parts form a dichotomy: they are mutually exclusive, since no part of B is contained in not-B and vice-versa, and they are jointly exhaustive, since they cover all of A, and together again give A.

A false dichotomy is a logical fallacy consisting of a supposed dichotomy which fails one or both of the conditions: it is not jointly exhaustive and/or not mutually exclusive. In its most common form, two entities are presented as if they are exhaustive, when in fact other alternatives are possible. In some cases, they may be presented as if they are mutually exclusive although there is a broad middle ground (see also undistributed middle).

Perceived Dichotomies are common in Western thought. C. P. Snow believes that Western society has become an argument culture (The Two Cultures). In The Argument Culture (1998), Deborah Tannen suggests that the dialogue of Western culture is characterized by a warlike atmosphere in which the winning side has truth (like a trophy). In such a dialogue, the middle alternatives are virtually ignored.[1]