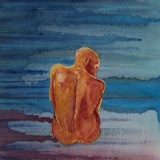 Vairāgya (Devanagari:वैराग्य, also spelt as Vairagya) is a Sanskrit term used in Hindu philosophy that roughly translates as dispassion, detachment, or renunciation, in particular renunciation from the pains and pleasures in the material world (Maya). The Hindu philosophers who advocated vairāgya told their followers that it is a means to achieve moksha.

Vairāgya is a compound word joining vai meaning "to dry, be dried" + rāga meaning "color, passion, feeling, emotion, interest" (and a range of other usages). This sense of "drying up of the passions" gives vairāgya a general meaning of ascetic disinterest in things that would cause attachment in most people. It is a "dis-passionate" stance on life. An ascetic who has subdued all passions and desires is called a vairāgika.

The concept of Vairāgya is found in Patañjali's Yoga Sūtras, where it along with practice (abhyāsa), is the key to restraint of the modifications of the mind (YS 1.12, "abhyāsa-vairāgyabhyāṁ tannirodhaḥ"). The term vairāgya appears three times in the Bhagavadgītā (6.35, 13.8, 18.52) where it is recommended as a key means for bringing control to the restless mind. It is also the main topic of Mokch upay/Yoga Vasistha.

Another important text on Renunciation, is Vairāgya shataka (100 verses of Renunciation), part of the Śatakatraya collection by Bhartrihari.

Even now you should learn to water the garden of your heart as well as to seek for the dry sands of knowledge.(48:6.32)