From Nordan Symposia
(Redirected from Domesticated)
Jump to navigationJump to search 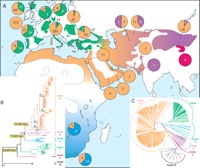 Domestication (from Latin domesticus) or taming is the process whereby a population of animals or plants, through a process of selection, becomes accustomed to human provision and control. A defining characteristic of domestication is artificial selection by humans. Some species such as the Asian Elephant, numerous members of which have for many centuries been used as working animals, are not domesticated because they have not normally been bred under human control, even though they have been commonly tamed. Humans have brought these populations under their care for a wide range of reasons: to produce food or valuable commodities (such as wool, cotton, or silk), for help with various types of work (such as transportation or protection), for protection of themselves and livestock and for scientific research, such as finding cures for certain diseases or simply to enjoy as companions or ornaments.

There is debate within the scientific community over how the process of domestication works. Some researchers give credit to natural selection, where mutations outside of human control make some members of a species more compatible to human cultivation or companionship. Others have shown that carefully controlled selective breeding is responsible for many of the collective changes associated with domestication. These categories are not mutually exclusive and it is likely that natural selection and selective breeding have both played some role in the processes of domestication throughout history. Either way, a process of selection is involved. The domestication of wheat is an example of this. Wild wheat falls to the ground to reseed itself when it is ripe, but domesticated wheat stays on the stem when it is ripe. There is evidence that this critical change came about as a result of a random mutation near the beginning of wheat's cultivation. Wheat with this mutation was the only wheat harvested and became the seed for the next crop. This wheat was much more useful to farmers and became the basis for the various strains of domesticated wheat that have since been developed.

The example of wheat has led some to speculate that mutations may have been the basis for other early instances of domestication. It is speculated that a mutation made some wolves less wary of humans. This allowed these wolves to start following humans to scavenge for food in their garbage dumps. Presumably something like a symbiotic relationship developed between humans and this population of wolves. The wolves benefited from human food scraps, and humans may have found that the wolves could warn them of approaching enemies, help with hunting, carry loads, provide warmth, or supplement their food supply. As this relationship evolved, humans eventually began to raise the wolves and breed the types of dogs that we have today.

Some researchers maintain that selective breeding rather than mutation or natural selection best explains how the process of domestication typically worked. Some of the most well-known evidence in support of selective breeding comes from an experiment by Russian scientist, Dmitri K. Belyaev, in the 1950s. His team spent many years breeding the Silver Fox (Vulpes vulpes) and selecting only those individuals that showed the least fear of humans. Eventually, Belyaev's team selected only those that showed the most positive response to humans. He ended up with a population of grey-coloured foxes whose behavior and appearance was significantly changed. They no longer showed any fear of humans and often wagged their tails and licked their human caretakers to show affection. More importantly, these foxes had floppy ears, smaller skulls, rolled tails and other traits commonly found in dogs.

Despite the success of this experiment, some scientists believe that selective breeding cannot always achieve domestication. They point out that known attempts to domesticate several kinds of wild animals in this way have failed repeatedly. The zebra is one example. Despite the fact that four species of zebra are interbreedable with and part of the same genus as the horse and the donkey, attempts at domestication have failed. The factors which influence 'domesticatability' of large animals (see below) are discussed in some detail in. Surprisingly only 14 species of large animal seem to be capable of domestication. In approximate order of their earliest domestication these are: dog, sheep, goat, pig, cow, horse, donkey, water buffalo, llama/alpaca, bactrian camel, and Arabian camel.[1]