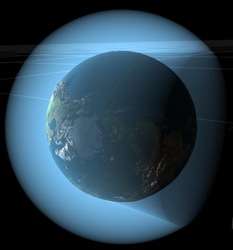 Earth's atmosphere is a layer of gases surrounding the planet Earth and retained by the Earth's gravity. It contains roughly (by molar content/volume) 78% nitrogen, 20.95% oxygen, 0.93% argon, 0.038% carbon dioxide, trace amounts of other gases, and a variable amount (average around 1%) of water vapor. This mixture of gases is commonly known as air. The atmosphere protects life on Earth by absorbing ultraviolet solar radiation and reducing temperature extremes between day and night.

There is no definite boundary between the atmosphere and outer space. It slowly becomes thinner and fades into space. Three quarters of the atmosphere's mass is within 11 km of the planetary surface. In the United States, people who travel above an altitude of 80.5 km (50 statute miles) are designated astronauts. An altitude of 120 km (400,000 ft) marks the boundary where atmospheric effects become noticeable during re-entry. The Kármán line, at 100 km (328,000 ft), is also frequently regarded as the boundary between atmosphere and outer space.

The temperature of the Earth's atmosphere varies with altitude; the mathematical relationship between temperature and altitude varies among six different atmospheric layers:

The boundaries between these regions are named the tropopause, stratopause, mesopause, thermopause and exobase. For more see: [1]