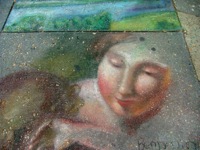 Ephemeral things (from Greek εφήμερος – ephemeros, literally "lasting only one day") are transitory, existing only briefly. Typically the term is used to describe objects found in nature, although it can describe a wide range of things.

Often happiness is described as being ephemeral, as one does not find it to be a permanent state, within the scope of human lives. There are always varying shades of happiness and disappointment.

In philosophy, Denis Diderot makes use of the term "Fallacy of the Ephemeral," which refers to assumptions made outside of one's scope of time, perception, or knowledge. "...in the memory of a rose no one had ever seen a gardener die". From Diderot's Le rêve de D'Alembert.[1]

The peace of God is shining in you now, and from your heart extends around the world. It pauses to caress each living thing, and leaves a blessing with it that remains forever and forever. What it gives must be eternal. It removes all thoughts of the ephemeral and valueless. It brings renewal to all tired hearts, and lights all vision as it passes by. All of its gifts are given everyone, and everyone unites in giving thanks to you who give, and you who have received. - (ACIM Lesson 188)