From Nordan Symposia
(Redirected from Epiphanies)
Jump to navigationJump to search 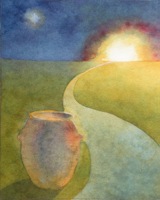 b : a revealing scene or moment

An epiphany (from the ancient Greek ἐπιφάνεια, epiphaneia, "manifestation, striking appearance") is the sudden realization or comprehension of the (larger) essence or meaning of something. The term is used in either a philosophical or literal sense to signify that the claimant has "found the last piece of the puzzle and now sees the whole picture," or has new information or experience, often insignificant by itself, that illuminates a deeper or numinous foundational frame of reference.

This concept is studied by psychologists and other scholars, particularly those attempting to study the process of innovation.

Although epiphanies are only a rare occurrence, following the process of significant labor, there is a common myth that epiphanies of sudden comprehension have also made possible leaps in technology and the sciences. Though famous individuals like Archimedes and Isaac Newton might have had epiphanies, they were almost certainly the end result of a long and intensive period of study those individuals have undertaken, not a sudden, out-of-the-blue, flash of inspiration on an issue they have not thought about previously.

Western Christian churches generally celebrate the Adoration of the Magi as the Incarnation of the infant Christ, and commemorate Feast of the Epiphany on January 6. Traditionally, Eastern churches celebrated Epiphany (or Theophany) in conjunction with Christ's baptism by John the Baptist and celebrated it on January 19; however, many have begun to adopt the Western custom of celebrating it on January 6, the twelfth day of Christmas. Protestant churches often celebrate Epiphany as a season, extending from the last day of Christmas until Ash Wednesday.

In more general terms the phrase religious epiphany is used when a person realizes their faith or when they are convinced that an event or happening was really caused by a deity or being of their faith. In Hinduism, for example, epiphany might refer to the realization of Arjuna that Krishna (incarnation of God serving as his charioteer in the "Bhagavad Gita") is indeed representing the Universe. The Hindu term for epiphany would be bodhodaya, from Sanskrit bodha 'wisdom' and udaya 'rising'. Or in Buddhism, the term might refer to the Buddha finally realizing the nature of the universe, and thus attaining Nirvana. The Zen term kensho also describes this moment, referring to the feeling attendant on realizing the answer to a koan.