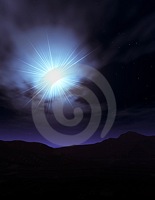 Christmas (pronounced /ˈkrɪsməs/), also referred to as Christmas Day, is an annual holiday celebrated on December 25 that commemorates the birth of Jesus of Nazareth.[2][3] The day marks the beginning of the larger season of Christmastide, which lasts twelve days.[4] The nativity of Jesus, which is the basis for the anno Domini system of dating, is thought to have occurred between 7 and 2 BC.[5] December 25 is not known to be Jesus' actual date of birth, and the date may have been chosen to correspond with either a Roman festival[6] or the winter solstice.[7]

For lessons on the topic of Christmas, follow this link.

Modern customs of the holiday include gift-giving, Church celebrations, exchange of Christmas cards, and the display of various decorations—including the Christmas tree, lights, mistletoe, nativity scenes, and holly. Santa Claus (also referred to as Father Christmas, although the two figures have different origins) is a popular mythological figure often associated with bringing gifts at Christmas for children. Santa is generally believed to be the result of a syncretization between Saint Nicholas and elements from pagan Nordic and Christian mythology, and his modern appearance is believed to have originated in 19th century media.

Christmas is celebrated throughout the Christian population, but is also celebrated by many non-Christians as a secular, cultural festival. Because gift-giving and several other aspects of the holiday involve heightened economic activity among both Christians and non-Christians, Christmas has become a major event for many retailers.

The word Christmas originated as a compound meaning "Christ's Mass". It is derived from the Middle English Christemasse and Old English Cristes mæsse, a phrase first recorded in 1038.[3] "Cristes" is from Greek Christos and "mæsse" is from Latin missa. In Greek, the letter Χ (chi), is the first letter of Christ, and it, or the similar Roman letter X, has been used as an abbreviation for Christ since the mid-16th century.[8] Hence, Xmas is often used as an abbreviation for Christmas.

For many centuries, Christian writers accepted that Christmas was the actual date on which Jesus was born.[9] However, in the early eighteenth century, scholars began proposing alternative explanations. Isaac Newton argued that the date of Christmas was selected to correspond with the winter solstice,[7] which in ancient times was marked on December 25.[10] In 1743, German Protestant Paul Ernst Jablonski argued Christmas was placed on December 25 to correspond with the Roman solar holiday Dies Natalis Solis Invicti and was therefore a "paganization" that debased the true church.[6] In 1889, Louis Duchesne suggested that the date of Christmas was calculated as nine months after the Annunciation (March 25), the traditional date of the Incarnation.[11][1]

Accumulations of wealth early became the badge of social distinction. Individuals in certain tribes would accumulate property for years just to create an impression by burning it up on some holiday or by freely distributing it to fellow tribesmen. This made them great men. Even modern peoples revel in the lavish distribution of Christmas gifts, while rich men endow great institutions of philanthropy and learning. Man's technique varies, but his disposition remains quite unchanged.[2]