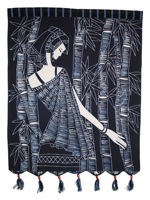 The terms "ethnicity" and "ethnic group" are derived from the Greek word ἔθνος ethnos, normally translated as "nation." The terms refer currently to people thought to have common ancestry who share a distinctive culture.

The term "ethnic" and related forms from the 14th century through the middle of the 19th century were used in English in the meaning of "pagan, heathen", as ethnikos was used as the LXX translation of Hebrew goyim "the nations, non-Hebrews, non-Jews".

The modern meaning emerged in the mid 19th century and expresses the notion of "a people" or "a nation". The term ethnicity is of 20th century coinage, attested from the 1950s. The term nationality depending on context may either be used synonymously with ethnicity, or synonymously with citizenship (in a sovereign state).

This modern usage of "ethnic group" further came to reflect the different kinds of encounters industrialised states have had with external groups, such as immigrants and indigenous peoples; "ethnic" thus came to stand in opposition to "national", to refer to people with distinct cultural identities who, through migration or conquest, had become subject to a state or "nation" with a different cultural mainstream.— with the first usage of the term ethnic group in 1935, and entering the Oxford English Dictionary in 1972.

b : being a member of a specified ethnic group <an ethnic German>
c : of, relating to, or characteristic of ethnics <ethnic neighborhoods> <ethnic foods>

An ethnic group (or ethnicity) is a group of people whose members identify with each other, through a common heritage, consisting of a common language, a common culture (often including a shared religion) and a tradition of common ancestry.

Members of an ethnic group are conscious of belonging to an ethnic group; moreover ethnic identity is further marked by the recognition from others of a group's distinctiveness.

Processes that result in the emergence of such identification are called ethnogenesis.[1]