From Nordan Symposia
(Redirected from Extinguished)
Jump to navigationJump to search 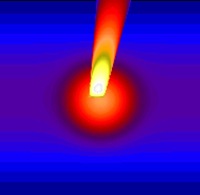 a. materially.
b. Theol. The destruction of soul as well as body.
c. Of conditions and circumstances: The bringing to an end; total abrogation.
d. Of collective and complex bodies: The action of destroying their combined or organized existence; effectual destruction.

Annihilation is defined as "total destruction" or "complete obliteration" of an object; having its root in the Latin nihil (nothing). A literal translation is "to make into nothing".

In physics, the word is used to denote the process that occurs when a subatomic particle collides with its respective antiparticle. Since energy and momentum must be conserved, the particles are not actually made into nothing, but rather into new particles. Antiparticles have exactly opposite additive quantum numbers from particles, so the sums of all quantum numbers of the original pair are zero. Hence, any set of particles may be produced whose total quantum numbers are also zero as long as conservation of energy and conservation of momentum are obeyed.

During a low-energy annihilation, photon production is favored, since these particles have no mass. However, high-energy particle colliders produce annihilations where a wide variety of exotic heavy particles are created.[1]