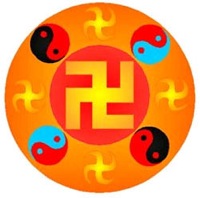 Falun Gong or Falun Dafa (literally means "Dharma Wheel Practice" or "Law Wheel Practice") is a spiritual discipline first introduced in China in 1992 through public lectures by its founder, Li Hongzhi. It combines the practice of meditation and slow-moving qigong exercises with a moral philosophy. Falun Gong emphasizes morality and the cultivation of virtue in its central tenets of Truthfulness, Compassion, and Forbearance (Chinese: 真、善、忍), and identifies as a qigong practice of the Buddhist school, though its teachings also incorporate elements drawn from Taoist traditions. Through moral rectitude and the practice of meditation, practitioners of Falun Gong aspire to better health and, ultimately, spiritual enlightenment.

Falun Gong emerged at the end of China's "qigong boom"—a period which saw the proliferation of similar practices of meditation, slow-moving exercises and regulated breathing. It differs from other qigong schools in its absence of fees or formal membership, lack of daily rituals of worship, its greater emphasis on morality, and the theological nature of its teachings. Western academics have described Falun Gong as a qigong discipline, a "spiritual movement" based on the teachings of its founder, a "cultivation system" in the tradition of Chinese antiquity, and sometimes a religion or new religious movement.

For lessons on the topic of Falun Gong, follow this link.

Although the practice initially enjoyed considerable support from Chinese officialdom, by the mid- to late-1990s, the Communist Party and public security organs increasingly viewed Falun Gong as a potential threat due to its size, independence from the state, and spiritual teachings. By 1999, some estimates placed the number of Falun Gong adherents in the tens of millions. Tensions culminated in April 1999, when over 10,000 Falun Gong practitioners gathered peacefully near the central government compound in Beijing to request legal recognition and freedom from state interference. This demonstration is widely seen as catalyzing the suppression that followed.

On 20 July 1999, the Communist Party leadership initiated a nationwide crackdown and multifaceted propaganda campaign intended to eradicate the practice. In October 1999 it declared Falun Gong a "heretical organization" that threatened social stability, and blocked Internet access to websites that mention Falun Gong. Human rights groups report that Falun Gong practitioners in China are subject to a wide range of human rights abuses; hundreds of thousands are believed to have been imprisoned extrajudicially, and practitioners in detention are subject to forced labor, psychiatric abuse, torture, and other coercive methods of thought reform at the hands of Chinese authorities. In the years since the suppression campaign began, Falun Gong adherents have emerged as a prominent voice in the Chinese dissident community, advocating for greater human rights and an end to Communist Party rule.

The first book of Falun Gong teachings was published in April 1993. Called China Falun Gong, or simply Falun Gong, is an introductory text that discusses qigong, Falun Gong's relationship to Buddhism, the principles of cultivation practice and the improvement of moral character (xinxing). The book also provides illustrations and explanations of the exercises and meditation.

The main body of teachings is articulated in the core book Zhuan Falun, published in Chinese in January 1995. The book is divided into nine "lectures", and was based on edited transcriptions of the talks Li gave throughout China in the preceding three years. Falun Gong texts have since been translated into an additional 38 languages. In addition to these central texts, Li has published several books, lectures, articles, books of poetry, which are made available on Falun Gong websites.

The Falun Gong teachings use numerous untranslated Chinese religious and philosophical terms, and make frequent allusion to characters and incidents in Chinese folk literature and concepts drawn from Chinese popular religion. This, coupled with the literal translation style of the texts, which imitate the colloquial style of Li’s speeches, can make Falun Gong scriptures difficult to approach for Westerners.

The main symbol of the practice is the Falun (Dharma wheel, or Dharmacakra in Sanskrit). In Buddhism, the Dharmacakra represents the completeness of the doctrine. To "turn the wheel of dharma" (Zhuan Falun) means to preach the Buddhist doctrine, and is the title of Falun Gong's main text. Despite the invocation of Buddhist language and symbols, the law wheel as understood in Falun Gong has distinct connotations, and is held to represent the universe. It is conceptualized by an emblem consisting of one large and four small Swastika symbols, representing the Buddha, and four small Taiji (yin-yang) symbols of the Daoist tradition.[1]