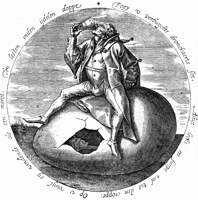 b : one who is victimized or made to appear foolish : dupe

b : one with a marked propensity or fondness for something <a dancing fool> <a fool for candy>

4: a cold dessert of pureed fruit mixed with whipped cream or custard

Foolishness and wisdom are contrasted in Paul's letter to the Corinthians. He condemns intellectual arrogance and advocates a humble attitude of foolishness in which it is then possible to learn. Plato likewise said, "He is the wisest man who knows himself to be ill-equipped for the study of wisdom" but Paul makes a distinction between wisdom and the reason of the Greeks.