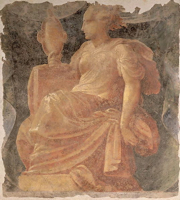 Prudence is the characteristic of exercising sound judgment in practical affairs. It is classically considered to be a virtue, and in particular one of the four Cardinal virtues (which are, with the three theological virtues, part of the seven virtues).

It is often associated with wisdom, insight, and knowledge. In this case, the virtue is the ability to judge between virtuous and vicious actions, not only in a general sense, but with regard to appropriate actions at a given time and place. Although prudence itself does not perform any actions, and is concerned solely with knowledge, all virtues had to be regulated by it. Distinguishing when acts are courageous, as opposed to reckless or cowardly, for instance, is an act of prudence, and for this reason it is classified as a cardinal (pivotal) virtue.

Although prudence would be applied to any such judgment, the more difficult tasks, which distinguish a person as prudent, are those in which various goods have to be weighed against each other, as when a person is determining what would be best to give charitable donations, or how to punish a child so as to prevent repeating an offense.

In modern English, however, the word has become increasingly synonymous with cautiousness. In this sense, prudence names a reluctance to take risks, which remains a virtue with respect to unnecessary risks, but when unreasonably extended (i.e. over-cautiousness), can become the vice of cowardice.

In the Nicomachean Ethics, Aristotle gives a lengthy account of the virtue phronesis (Greek: ϕρονησιϛ), which has traditionally been translated as "prudence", although this has become increasingly problematic as the word has fallen out of common usage. More recently ϕρονησιϛ has been translated by such terms as "practical wisdom", "practical judgment," or "rational choice." [1]