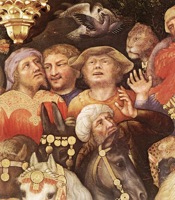 Middle English, from Late Latin gentilis, from Latin gent-, gens nation (from which, together with forms of the cognate Greek word genos, also derive gene, general, genus and genesis). The original meaning of "clan" or "family" was extended in post-Augustan Latin to acquire the wider meaning of belonging to a distinct nation or ethnicity. Later still the word came to refer to other nations, 'not a Roman citizen'. After the Christianization of the empire it could also be used of pagan or barbarian cultures.

The term Gentile (from Latin gentilis, by the French "gentil", female: "gentille", meaning of or belonging to a clan or tribe) refers to non-Israelite peoples or nations in English translations of the Bible.

Latin and subsequently English translators selectively used the term gentiles when the context for the base term 'peoples' or 'nations', Hebrew, גוי (goy) and נכרי (nokhri) in the Hebrew Bible and the Greek word ἔθνη (éthnē) in the New Testament, indicated non-Israelite peoples or nations. The term gentiles is derived from Latin, used for contextual translation, and not an original Hebrew or Greek word from the Bible.