From Nordan Symposia
(Redirected from Grandiosity)
Jump to navigationJump to search 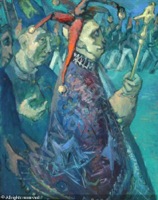 The title is taken from Act III, Scene III of Shakespeare's Othello:

Farewell the neighing steed and the shrill trump,
The spirit-stirring drum, th'ear-piercing fife,
The royal banner, and all quality,
Pride, pomp, and circumstance of glorious war!"

But also, on the score of the first march, Elgar set as a motto for the whole set of marches a verse from Lord de Tabley's poem The March of Glory which begins

Like a proud music that draws men on to die
Madly upon the spears in martial ecstasy,
A measure that sets heaven in all their veins

And iron in their hands.

I hear the Nation march
Beneath her ensign as an eagle's wing;
O'er shield and sheeted targe
The banners of my faith most gaily swing;
Moving to victory with solemn noise,
With worship and with conquest, and the voice of myriads.

proclaiming the "shows of things": the naïve assumption that the splendid show of military pageantry –"Pomp"– has no connection with the drabness and terror —"Circumstance"— of actual warfare. The first four marches were all written before the events of World War I shattered that belief, and the styles in which wars were written about spurned the false romance of the battle-song. Elgar understood this.[1]