From Nordan Symposia
(Redirected from Honors)
Jump to navigationJump to search 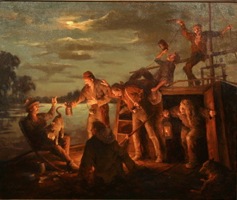 Honor (from the Latin word honos, honoris) is the evaluation of a person's trustworthiness and social status based on that individual's espousals and actions. Honour is deemed exactly what determines a person's character: whether or not the person reflects honesty, respect, integrity, or fairness. Accordingly, individuals are assigned worth and stature based on the harmony of their actions, code of honour, and that of the society at large. Honour can be analysed as a relativistic concept, i.e., conflicts between individuals and even cultures arising as a consequence of material circumstance and ambition, rather than fundamental differences in principle. Alternatively, it can be viewed as nativist — that honour is as real to the human condition as love, and likewise derives from the formative personal bonds that establish one's personal dignity and character.

For lessons on the topic of Honor, follow this link.

Dr Samuel Johnson, in his A Dictionary of the English Language (1755), defined honour as having several senses, the first of which was "nobility of soul, magnanimity, and a scorn of meanness." This sort of honour derives from the perceived virtuous conduct and personal integrity of the person endowed with it. On the other hand, Johnson also defined honour in relationship to "reputation" and "fame"; to "privileges of rank or birth", and as "respect" of the kind which "places an individual socially and determines his right to precedence." This sort of honour is not so much a function of moral or ethical excellence, as it is a consequence of power. Finally, with respect to women, honour may be synonymous with "chastity" or "virginity", or in case of a married woman, "fidelity".