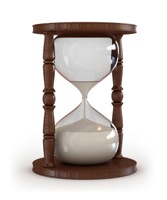 An hourglass (sandglass, sand timer, sand clock, egg timer) measures the passage of a few minutes or an hour of time. It has two connected vertical glass bulbs allowing a regulated trickle of material from the top to the bottom. Once the top bulb is empty, it can be inverted to begin timing again. The name hourglass comes from historically common hour timing. Factors affecting the time measured include the amount of sand, the bulb size, the neck width, and the sand quality. Alternatives to sand are powdered eggshell and powdered marble (sources disagree on the best material). In modern times, hourglasses are ornamental, or used when an approximate measure suffices, as in egg timers for cooking or for board games.

The shape behind the hourglass has hardly any written evidence of why its external form is the shape that it is. The glass bulbs used, however, have changed in style and design over time. While the main designs have always been ampoule in shape, the bulbs were not always connected. The first hourglasses were two separate bulbs with a cord wrapped at their union that was then coated in wax to hold the piece together and let sand flow in between. It was not until 1760 that both bulbs were blown together to keep moisture out of the bulbs and regulate the pressure within the bulb that varied the flow of the granular substance.

Unlike most other methods of measuring time, the hourglass concretely represents the present as being between the past and the future, and this has made it an enduring symbol of time itself.

The hourglass, sometimes with the addition of metaphorical wings, is often depicted as a symbol that human existence is fleeting, and that the "sands of time" will run out for every human life.] It was used thus on pirate flags, to strike fear into the hearts of the pirates' victims. In England, hourglasses were sometimes placed in coffins, and they have graced gravestones for centuries. The hourglass was also used in alchemy as a symbol for hour.[1]