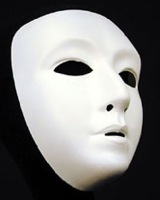 Middle English ypocrisie, from Anglo-French, from Late Latin hypocrisis, from Greek hypokrisis act of playing a part on the stage, hypocrisy, from hypokrinesthai to answer, act on the stage, from hypo- + krinein to decide

The word hypocrisy comes from the Greek ὑπόκρισις (hypokrisis), which means "play-acting", "acting out", "coward" or "dissembling". The word hypocrite is from the Greek word ὑποκρίτης (hypokrites), the agentive noun associated with υποκρίνομαι (hypokrinomai), i.e., "I play a part". Both derive from the verb κρίνω, "judge" (»κρίση, "judgement" »κριτική (kritiki), "critics") presumably because the performance of a dramatic text by an actor was to involve a degree of interpretation, or assessment, of that text.

For lessons on the topic of Hypocrisy, follow this link.

Alternatively, the word is an amalgam of the Greek prefix hypo-, meaning "under", and the verb krinein, meaning "to sift or decide". Thus the original meaning implied a deficiency in the ability to sift or decide. This deficiency, as it pertains to one's own beliefs and feelings, informs the word's contemporary meaning.[3]

Whereas hypokrisis applied to any sort of public performance (including the art of rhetoric), hypokrites was a technical term for a stage actor and was not considered an appropriate role for a public figure. In Athens in the 4th century BC, for example, the great orator Demosthenes ridiculed his rival Aeschines, who had been a successful actor before taking up politics, as a hypokrites whose skill at impersonating characters on stage made him an untrustworthy politician. This negative view of the hypokrites, perhaps combined with the Roman disdain for actors, later shaded into the originally neutral hypokrisis. It is this later sense of hypokrisis as "play-acting", i.e., the assumption of a counterfeit persona, that gives the modern word hypocrisy its negative connotation.

Hypocrisy is the act of pretending to have beliefs, opinions, virtues, feelings, qualities, or standards that one does not actually have. Hypocrisy involves the deception of others and is thus a kind of lie.

Hypocrisy is not simply failing to practice those virtues that one preaches. Samuel Johnson made this point when he wrote about the misuse of the charge of "hypocrisy" in Rambler No. 14:

Nothing is more unjust, however common, than to charge with hypocrisy him that expresses zeal for those virtues which he neglects to practice; since he may be sincerely convinced of the advantages of conquering his passions, without having yet obtained the victory, as a man may be confident of the advantages of a voyage, or a journey, without having courage or industry to undertake it, and may honestly recommend to others, those attempts which he neglects himself.

Thus, an alcoholic's advocating temperance, for example, would not be considered an act of hypocrisy so long as the alcoholic made no pretense of constant sobriety.

Although hypocrisy has been called "the tribute that vice pays to virtue"[1], and a bit of it certainly greases the wheels of social exchange, it may also corrode the well-being of those people who continually make or are forced to make use of it.[2] As Boris Pasternak has Yurii say in Doctor Zhivago, "Your health is bound to be affected if, day after day, you say the opposite of what you feel, if you grovel before what you dislike... Our nervous system isn't just fiction, it's part of our physical body, and it can't be forever violated with impunity."