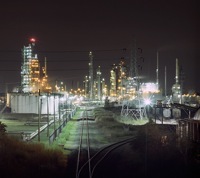 b : a department or branch of a craft, art, business, or manufacture; especially : one that employs a large personnel and capital especially in manufacturing
c : a distinct group of productive or profit-making enterprises <the banking industry>
d : manufacturing activity as a whole <the nation's industry>

For lessons on the related topic of Business, follow this link.

Industry refers to the production of an economic good (either material or a service) within an economy. There are four key industrial economic sectors: the primary sector, largely raw material extraction industries such as mining and farming; the secondary sector, involving refining, construction, and manufacturing; the tertiary sector, which deals with services (such as law and medicine) and distribution of manufactured goods; and the quaternary sector, a relatively new type of knowledge industry focusing on technological research, design and development such as computer programming, and biochemistry. A fifth, quinary, sector has been proposed encompassing nonprofit activities. The economy is also broadly separated into public sector and private sector, with industry generally categorized as private. Industries are also any business or manufacturing.

Industry in the sense of manufacturing became a key sector of production and labour in European and North American countries during the Industrial Revolution, which upset previous mercantile and feudal economies through many successive rapid advances in technology, such as the steel and coal production. It is aided by technological advances, and has continued to develop into new types and sectors to this day. Industrial countries then assumed a capitalist economic policy. Railroads and steam-powered ships began speedily establishing links with previously unreachable world markets, enabling private companies to develop to then-unheard of size and wealth. Following the Industrial Revolution, perhaps a third of the world's economic output is derived from manufacturing industries—more than agriculture's share.