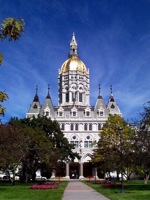 A capital city (or just capital) is the area of a country, province, region, or state, regarded as enjoying primary status; although there are exceptions, a capital is almost always a city which physically encompasses the offices and meeting places of the seat of government and is fixed by law. An alternate term is political capital, but this phrase has a second meaning based on an alternative sense of capital. Often, a capital city is the largest city in that country but not always.

The word capital is derived from the Latin caput meaning "head" and, in the United States, the related term capitol refers to the building where government business is chiefly conducted.

The seats of government in major sub-state jurisdictions are often called "capitals", but this is typically the case only in countries with some degree of federalism, where major substate jurisdictions have an element of sovereignty. In unitary states, "administrative center" or other similar terms are typically used. For example, the seat of government in a U.S. state is usually called its "capital", but the main city in a region of England is usually not, even though in Ireland, a county's main town is usually regarded as its capital. At lower administrative subdivisions, terms such as county town, county seat, or borough seat are usually used.

Historically, the major economic center of a state or region often becomes the focal point of political power, and becomes a capital through conquest or amalgamation. This was the case for London, Berlin, and Moscow. The capital naturally attracts the politically motivated and those whose skills are needed for efficient administration of government such as lawyers, journalists, and public policy researchers. A capital that is the prime economic, cultural, or intellectual center is sometimes referred to as a primate city. Such is certainly the case with Paris, London and Madrid among national capitals, and Milan, Irkutsk in their respective state or province.

Capitals are sometimes sited to discourage further growth in an existing major city. Naypyidaw was founded in Burma's interior with the justification that the former capital, Yangon, was considered over-crowded.

The convergence of political and economic or cultural power is by no means universal. Traditional capitals may be economically eclipsed by provincial rivals, as occurred with Nanjing by Shanghai. The decline of a dynasty or culture could also mean the extinction of its capital city, as occurred with Babylon and Cahokia. Many present-day capital cities, such as New Delhi, Abuja, Ankara, Brasília, Canberra, Astana, Islamabad, Ottawa and Washington, D.C. are planned cities that were built as an alternative to the seat of government residing in an established population centre for various reasons. In many cases in their own right they have become gradually established as new business or commercial centres.

In economics, capital, capital goods, or real capital are factors of production used to create goods or services that are not themselves significantly consumed (though they may depreciate) in the production process. Capital goods may be acquired with money or financial capital.