From Nordan Symposia
(Redirected from Units)
Jump to navigationJump to search 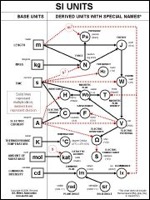 The definition, agreement, and practical use of units of measurement have played a crucial role in human endeavour from early ages up to this day. Disparate systems of units used to be very common. Now there is a global standard, the International System of Units (SI), the modern form of the metric system. The SI has been or is in the process of being adopted throughout the world.

In trade, weights and measures is often a subject of governmental regulation, to ensure fairness and transparency. The Bureau international des poids et mesures (BIPM) is tasked with ensuring worldwide uniformity of measurements and their traceability to the International System of Units (SI). Metrology is the science for developing national and internationally accepted units of weights and measures.

In physics and metrology, units are standards for measurement of physical quantities that need clear definitions to be useful. Reproducibility of experimental results is central to the scientific method. A standard system of units facilitates this. Scientific systems of units are a refinement of the concept of weights and measures developed long ago for commercial purposes.