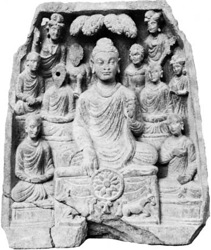 The term Indian philosophy may refer to any of several traditions of philosophical thought that originated in India.

Chatterjee and Datta give this definition, explaining that a cornerstone of Indian philosophy is a tradition of respect for multiple views:

"Indian philosophy denotes the philosophical speculations of all Indian thinkers, ancient or modern, Hindus or non-Hindus, theists or atheists....

Indian philosophy is marked... by a striking breadth of outlook which only testifies to its unflinching devotion to the search for truth. Though there were many different schools and their views differed sometimes vary widely, yet each school took care to learn the views of all the others and did not come to any conclusions before considering thoroughly what others had to say and how their points could be met.... If the openness of mind — the willingness to listen to what others have to say; has been one of the chief causes of the wealth and greatness of Indian philosophy in the past, it has a definite moral for the future."

The Sanskrit term for "philosopher" is dārśanika, one who is familiar with the systems of philosophy.

Indian thinkers viewed philosophy as a practical necessity that needed to be cultivated in order to understand how life can best be led. It became a custom for Indian writers to explain at the beginning of philosophical works how it serves human ends (puruṣārtha).

The idea of, translated as "righteousness" or "the cosmic and social order" by Gavin Flood, Flood, pp. 45, 47. plays a pervasive role, as Chatterjee and Datta explain:

"A firm faith in 'an eternal moral order' dominates the entire history of Indian philosophy, barring the solitary exception of the Cārvāka materialists. It is the common atmosphere of faith in which all these systems, Vedic and non-Vedic, theistic and atheistic, move and breathe. The faith in an order — a law that makes for regularity and righteousness and works in the gods, the heavenly bodies and all creatures — pervades the imagination of the seers of Ṛig-veda which calls this inviolable moral order. Chatterjee and Datta, p. 14.

Ancient Indian philosophy has been divided into broad divisions:

The Sutra Period marks the definite beginning of systematic philosophical thinking. A sutra-work consists of a collection of brief statements, aphorisms, or problems, with answers, objections, and possible replies. The Brahma-sūtra of Bādarāyaṇa, for example, sums up and systematizes the philosophical teachings of various Vedic works, chiefly the Upanishads, and also mention and answer of both actual and possible objections to those views. It is the first systematic treatise on the Vedanta literature. Similarly we have for the Mimamsa the sutras of Jaimini, for the Nyaya the sutras of Gotama, for the Vaisheshika the sutras of Kanada, and for the Yoga the sutras of Patanjali.

Because the sutra form is by nature brief, their meanings were not always clear. During the Scholastic Period this gave rise for interpretive commentaries (bhāṣyas), which play a major role in philosophical literature. In some cases, different authors wrote major commentaries on the same sutra-work, but with very different interpretations reflecting their own philosophical positions. In time, commentaries arose upon commentaries, and additional independent works were written in defense of particular views.

Classical Indian philosophy can be roughly categorised into "orthodox" (astika) schools of Hindu philosophy, and "heterodox" (nāstika) schools that do not accept the authorities of the Vedas.

Many Hindu intellectual traditions were codified during the medieval period of Brahmanic-Sanskritic scholasticism into a standard list of six orthodox (astika) schools (darshanas), the "Six Philosophies" (ṣad-darśana), all of which cite Vedic authority as their source:

These are often coupled into three groups for both historical and conceptual reasons: Nyaya-Vaishesika, Samkhya-Yoga, and Mimamsa-Vedanta.

The six systems mentioned here are not the only orthodox systems, they are the chief ones, and there are other orthodox schools such as the "Grammarian" school.

The shramana schools, including Jainism and Buddhism, also developed.

Schools that do not accept the authority of the Vedas are by definition unorthodox (nastika) systems.

Carvaka is characterized as a materialistic and atheistic school of thought. While this branch of Indian philosophy is not considered to be part of the six orthodox schools of Hinduism, it is noteworthy as evidence of a materialistic movement within Hinduism.

Buddhist philosophy is a system of beliefs based on the teachings of Siddhartha Gautama, an Indian prince later known as the Buddha. Buddhism is a non-theistic philosophy, one whose tenets are not especially concerned with the existence or nonexistence of a God or gods. The question of God is largely irrelevant in Buddhism, though some sects (notably Tibetan Buddhism) do venerate a number of gods drawn in from local indigenous belief systems.

From its inception, Buddhism has had a strong philosophical component. Buddhism is founded on the rejection of certain orthodox Hindu philosophical concepts. The Buddha criticized all concepts of metaphysical being and non-being, and this critique is inextricable from the founding of Buddhism.

Buddhism shares many philosophical views with Hinduism, such as belief in karma, a cause-and-effect relationship between all that has been done and all that will be done. Events that occur are held to be the direct result of previous events. The ultimate goal for both Hindu and Buddhist practitioners is to eliminate karma (both good and bad), end the cycle of rebirth and suffering, and attain freedom (Moksha or Nirvana).

Jaina philosophy, was founded by Mahavira (599 - 527 BCE). Anekantavada is a basic principle of Jainism positing that reality is perceived differently from different points of view, and that no single point of view is completely true. Jain doctrine states that only Kevalis, those who have infinite knowledge, can know the true answer, and that all others would only know a part of the answer. Anekantavada is related to the Western philosophical doctrine of Subjectivism.

The Arthashastra, attributed to the Mauryan minister Chanakya, is one of the early Indian texts devoted to political philosophy. It is dated to 4th century BCE and discusses ideas of statecraft and economic policy.

The political philosophy most closely associated with India is the one of ahimsa (non-violence) and Satyagraha, popularized by Mahatma Gandhi during the Indian struggle for independence. It was influenced by the Indian Dharmic philosophy (particularly the Bhagvad Gita) and Jesus, as well as, secular writings of authors such as Leo Tolstoy, Henry David Thoreau and John Ruskin. In turn it influenced the later movements for independence and civil rights led by Nelson Mandela and Martin Luther King, Jr..