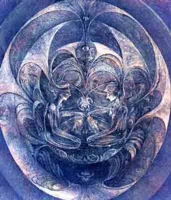 In Buddhism, the sum of a person's actions in one life, which determine his form in the next; from Skt. karman- "action, fate," related to krnoti, Avestan kerenaoiti "makes," O.Pers. kunautiy "he makes;" from PIE base *kwer- "to make, form," related to the second element in Sanskrit.

Karma (Sanskrit: कर्म About this sound kárma (help·info), kárman- "act, action, performance"; Pali: kamma) in Indian religions is the concept of "action" or "deed", understood as that which causes the entire cycle of cause and effect (i.e., the cycle called saṃsāra) originating in ancient India and treated in Hindu, Jain, Sikh and Buddhist philosophies.

For lessons on the topic of Karma, follow this link.

Karma is an Eastern religious concept in contradistinction to 'faith' espoused by Abrahamic religions (Judaism, Christianity, and Islam), which view all human dramas as the will of God as opposed to present - and past - life actions. In theistic schools of Hinduism, humans have free will to choose good or evil and suffer the consequences, which require the will of God to implement karma's consequences, unlike Buddhism or Jainism which do not accord any role to a supreme God or gods. In Eastern beliefs, the karmic effects of all deeds are viewed as actively shaping past, present, and future experiences. The results or 'fruits' of actions are called karma-phala.