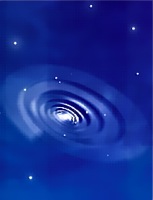 Indigo children is a New Age concept developed by Nancy Anne Tappe describing children who are alleged to possess special traits or abilities. Beliefs about indigo children range from their being the next stage in human evolution, possessing paranormal abilities such as telepathy, and lacking communication skills to the belief that they are simply more empathetic and creative than their non-indigo peers.

Skeptics suggest that the indigo phenomenon is due to parents preferring to believe their children are special, rather than having a medical diagnosis which implies damage or imperfection. Also criticized are the traits used to describe children, which have been compared to the Forer effect - so vague as to be able to apply to anyone.

For lessons on the topic of Indigo Children, follow this link.

The concept was initially developed in the 1970s, gaining popular interest with the publication of a series of books in the late 1990s and the release of several films in the following decade. A variety of books, conferences and related materials have been created surrounding the idea of indigo children, which have been criticized for a means of making money from credulous parents.

The term indigo children originates with parapsychologist and self-described synesthete and psychic, Nancy Anne Tappe, who first described the concept in the 1970s. Tappe published the book Understanding Your Life Through Color in 1982 describing the concept,[1] stating that during the mid 1960s she began noticing that many children were being born with "indigo" auras[2] (though in other publications Tappe has said the color indigo came from the "life colors" of the children which she acquired through her synesthesia[3]). The idea of indigo children was later popularized by the 1998 book The Indigo Children: The New Kids Have Arrived, written by husband and wife self-help lecturers Lee Carroll and Jan Tober.[4] The promotion of the concept by Tober and Carroll brought greater attention and exposure to the topic, and their book became the authoritative source on indigo children. They describe the goal of indigo children to be a remaking of the world into one lacking war, trash and processed food.

In 2002, an international conference on indigo children was held in Hawaii, drawing 600 attendees, with subsequent conferences the following years in Florida and Oregon. The concept was popularized and spread further by a feature film and documentary released in 2005, both directed by James Twyman, a New Age writer.[5]

Descriptions of indigo children include the belief that they are empathetic, curious, possess a clear sense of self-definition and purpose, strong-willed, independent, often perceived by friends or family as being weird, and also exhibit a strong inclination towards spiritual matters (e.g. God) from early childhood. Indigo children have also been described as having a strong feeling of entitlement, or "deserving to be here." Other alleged traits include a high intelligence quotient, an inherent intuitive ability, and resistance to authority.[2][4] According to Tober and Carroll, indigo children function poorly in conventional schools due to their rejection of authority, being smarter than their teachers and a lack of response to guilt-, fear- or manipulation-based discipline.[5]

According to research psychologist Russell Barkley, the New Age movement has yet to produce empirical evidence of the existence of indigo children and the 17 traits most commonly attributed to them were akin to the Forer effect; so vague they could describe nearly anyone. There is also concern that labeling a disruptive child an "indigo" may delay proper diagnosis and treatment that may help the child.[2][5] Others have stated that many of the traits of indigo children could be more prosaically interpreted as simple arrogance and selfish individualism, which parents with certain New Age beliefs see as being something that they are not.[6]

Tober and Carroll's book The Indigo Children linked the concept with diagnosis of attention-deficit hyperactivity disorder (ADHD), makes the case that indigos are a new stage of evolution rather than children with a medical diagnosis, and that "indigos" require special treatment rather than medications.[4] Many children called indigo by their parents are diagnosed with ADHD.[6] Robert Todd Carroll points out that labeling a child an indigo is an alternative to a diagnosis that implies imperfection, damage or mental illness, which may appeal to many parents, a belief echoed by many academic psychologists.[6] He also points out that many of the commentators on the indigo phenomenon are of varying qualifications and expertise. Linking the concept of indigo children with the use of Ritalin to control ADHD, Carroll states "The hype and near-hysteria surrounding the use of Ritalin has contributed to an atmosphere that makes it possible for a book like Indigo Children to be taken seriously. Given the choice, who wouldn't rather believe their children are special and chosen for some high mission rather than that they have a brain disorder?"[7]

Stephen Hinshaw, a professor of psychology at the University of California, Berkeley, states that concerns regarding the overmedicalization of children are legitimate but even gifted children with ADHD learn better with more structure rather than less, even if the structure initially causes difficulties. Many indigo children are home schooled.[2]

Skeptics see the concept of indigo children as made up of extremely general traits, a sham diagnosis that is an alternative to a medical diagnosis, with a complete lack of science or studies to support it.[2][6] The lack of science is acknowledged by some believers, including Doreen Virtue, author of The Care and Feeding of Indigos, and James Twyman, who produced two films on indigo children and offers materials and courses related to the phenomenon.

“ "Are you an indigo?" he asked Dusk. The boy looked at him shyly and nodded. "I'm an avatar," Dusk said. "I can recognize the four elements of earth, wind, water and fire. The next avatar won't come for 100 years." The man seemed impressed.[5] ”

Readers of the Dallas Observer later wrote in to inform the newspaper that the child's response appeared to be taken from the storyline of Avatar: The Last Airbender; a children's cartoon showing on Nickelodeon at the time of the interview. The editor of the Dallas Observer later admitted they were not aware of the possible connection until readers brought it to their attention.[8]