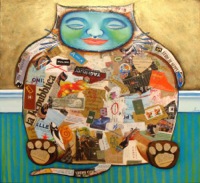 Latin indulgēre to be courteous or complaisant, to be kind or indulgent, to yield, give oneself up (to), indulge in; to bestow as a favor, to concede, grant, allow.

b : to take unrestrained pleasure in : gratify

2a : to yield to the desire of : humor <please indulge me for a moment>

b : to treat with excessive leniency, generosity, or consideration

In Catholic theology, an indulgence is the full or partial remission of temporal punishment due for sins which have already been forgiven. The indulgence is granted by the Catholic Church after the sinner has confessed and received absolution. The belief is that indulgences draw on the Treasury of Merit accumulated by Christ's superabundantly meritorious sacrifice on the cross and the virtues and penances of the saints. They are granted for specific good works and prayers.

Indulgences replaced the severe penances of the early Church. More exactly, they replaced the shortening of those penances that was allowed at the intercession of those imprisoned and those awaiting martyrdom for the faith.

Alleged abuses in selling and granting indulgences were a major point of contention when Martin Luther initiated the Protestant Reformation (1517).[1]