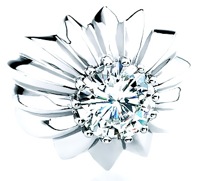 The word jewellery is derived from the word jewel, which was anglicised from the Old French "jouel" circa the 13th century.[1] Further tracing leads back to the Latin word "jocale", meaning plaything. Jewellery is one of the oldest forms of body adornment; recently found 100,000 year-old beads made from Nassarius shells are thought to be the oldest known jewellery.

b. An ornament worn as the badge of an Order of honour, or as a mark of distinction or honour.

b. Watchmaking. A precious stone, usually a ruby, used for a pivot-hole, on account of its hardness and resistance to wear.
c. Applied to an imitation, in glass or enamel, of a real gem; as those worn on women's [[Fashion|dresses in the end of the 19th c.; also, an ornamental boss of glass in a stained-glass window.

Jewellery is sometimes seen as wealth storage or functionally as holding a garment or hair together. It has from very early times also been regarded as a form of personal adornment. The first pieces of jewellery were made from natural materials, such as bone, animal teeth, shell, wood and carved stone. More exotic jewellery was probably made for wealthy people or as indications of social status. In some cases people were buried with their jewellery.

Jewellery has been made to adorn nearly every body part, from hairpins to toe rings and many more types of jewellery. While high-quality jewellery is made with gemstones and precious metals, such as silver or gold, there is also a growing demand for art jewellery where design and creativity is prized above material value. In addition, there is the less costly costume jewellery, made from lower value materials and mass-produced. Other variations include wire sculpture (wrap) jewellery, using anything from base metal wire with rock tumbled stone to precious metals and precious gemstones.[1]