Landon Cabell Garland was born March 21, 1810 in Nelson County, Virginia. He graduated with first honors from Hampdon Sidney College in 1829. He taught chemistry and natural philosophy at Washington College (Lexington, Virginia), c1829-1830, and taught chemistry and natural history at Randolph-Macon College, 1833-1834, eventually being elected chair of the department. In 1837, he was elected president of Randolph-Macon College. In 1854, he was elected president of the University of Alabama.

During the Civil War, the University of Alabama was burned to the ground. After a year of trying to rebuild the university, Garland accepted the chair of philosophy and astronomy at the University of Mississippi in 1867. It was here that McTyeire, now a Methodist bishop, sought out his former teacher and enlisted him in the campaign to build a Methodist university in Nashville, TN. Garland, the most highly respected academic in Southern Methodism, wrote essay after essay in church publications on the need for an "educated ministry." With Garland onboard, the bishop now needed the money, and for that he turned to Commodore Cornelius Vanderbilt.

Garland had definite ideas about the rules that would govern the university's place in this world. Under Garland's plan, Vanderbilt would have four departments: Biblical Studies and Literature, Science and Philosophy, Law and Medical. Though Bishop McTyeire usually was there looking over his shoulder, Chancellor Garland clearly set the mood of the campus. Steeped in Scottish moral philosophy, Garland believed that the development of character was the central purpose of a true university. He did his part to mold character each Wednesday when he preached sermons to the student body in chapel, and he was staunch in his opposition to dormitories, claiming they were "injurious to both morals and manners." 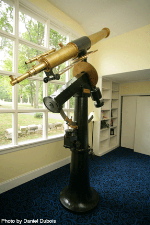 The Barnard telescope, brought to Vanderbilt University more than 130 years ago by the university's first chancellor, Landon Garland, has a new home at Dyer Observatory�s Exploration House.

Garland traveled to Europe in the late 1870s to buy various astronomy and physics instruments for the university that could not be found in the United States. Among the items he brought back was a six-inch refracting telescope built by the firm of Thomas Cooke of York, England. The telescope was installed in 1876 in the university’s first observatory, which stood where Rand Hall is now located. Today the telescope is named the Barnard Telescope after Edward Emerson Barnard and having been restored, can be seen in its new home at the Dyer Observatory's Exploration House.

In the early days, the closest thing to campus radicals were the law students. In fact, the law students provided the first challenge to the chancellor over the concept of an open forum. Garland had invited John Sherman, brother of Gen. William Tecumseh Sherman, to address the students in chapel. For the law students, it was more than they could bear to sit through a speech by the brother of the Yankee general who had burned a wide swath from Atlanta to the sea. The law students held a protest meeting, then marched single file out of the building, some playing Dixie on their harmonicas.

In 1889 Bishop McTyeire died. Two years later Garland tendered his resignation to the board of trustees, but they kept it in abeyance until 1893 when the board named as Chancellor James H. Kirkland. Garland died February 13, 1895 and was buried with the three bishops - McTyeire, Soule, and McKendree in a fenced grave near the Divinity Quadrangle on the Vanderbilt campus where Garland Hall is named in his honor.

His papers, The Landon Cabell Garland Papers, 1830-1993, include correspondence, diaries, speeches, sermons, a report to the Vanderbilt University Board of Trust, and personal and biographical materials. The collection is small, only 1/3 of a cubic foot. These are personal papers of Chancellor Garland and are not to be confused with his university papers, which are housed in the University Archives. This collection provides a small snap shot of Chancellor Garland's personal life, with the family correspondence providing the main interest.[1]