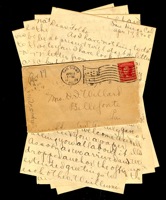 A letter is a written message from one person to another. The role of letters in communication has changed significantly since the 19th century. Historically, letters (in paper form) were the only reliable means of communication between two persons in different locations.

As communication technology has diversified, posted letters have become less important as a routine form of communication; they however still remain but in a modified form. For example, the development of the telegraph shortened the time taken to send a letter by transferring the letter as an electrical signal (for example in Morse code) between distant points. At the telegraph office closest to the destination for the letter, the signal was transferred back into a hard copy format and sent as a normal mail to the persons home. This allowed the normal speed of communication to be drastically shortened for larger and larger distances. This required specialized technicians to encode and decode the letter. The facsimile (fax) machine took this one step farther and an entire letter could be completely transferred in electronic form from the sender's house to the receiver's home by means of the telephone network as an image.

Today, the Internet has become the predominant medium for sending letters. The term e-mail, meaning electronic mail, has entered into everyday speech. By analogy, the term letter is sometimes used for e-mail messages with a formal letter-like format. Historically, letters exist from the time of ancient India, ancient Egypt and Sumer, through Rome, Greece and China, up to the present day. Letters make up several of the books of the Bible. Archives of correspondence, whether for personal, diplomatic, or business reasons, serve as primary sources for historians.