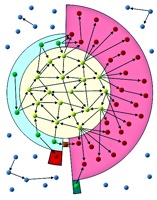 Library Science is an interdisciplinary science incorporating the humanities, law and applied science to study topics related to libraries, the collection, organization, preservation and dissemination of information resources, and the political economy of information. Historically, library science has also included archival science. "The distinction between a library and an archive is relatively modern". This includes how information resources are organized to serve the needs of select user groups, how people interact with classification systems and technology, how information is acquired, evaluated and applied by people in and outside of libraries as well as cross-culturally, how people are trained and educated for careers in libraries, the ethics that guide library service and organization, the legal status of libraries and information resources, and the applied science of computer technology used in documentation and records management.

Library and information science, it may be argued, began with the first effort to organize a collection of information and provide access to that information.

At Ugarit in Syria excavations have revealed a palace library, temple library, and two private libraries which date back to around 1200 BCE, containing diplomatic texts as well as poetry and other literary forms. In the 7th century, King Ashurbanipal of Assyria assembled what is considered the first systematically collected library at Nineveh; previous collections functioned more as passive archives. The legendary Library of Alexandria is perhaps the best known example of an early library, flourishing in the 3rd century BC and possibly inspired by Demetrius Phalereus.

One of the curators of the imperial library in the Han Dynasty is believed to have been the first to establish a library classification system and the first book notation system. At this time the library catalog was written on scrolls of fine silk and stored in silk bags.

Thomas Jefferson, whose library at Monticello consisted of thousands of books, devised a classification system inspired by the Baconian method, which grouped books more or less by subject rather than alphabetically, as it was previously done. Jefferson's collection became the nucleus of the first national collection of the United States when it was transferred to Congress after a fire destroyed the Congressional Library during the War of 1812. The Jefferson collection was the start of what we now know as the Library of Congress.

The first texbook on library science was published 1808 by Martin Schrettinger,[1] followed by books of Johann Georg Seizinger and others.

In the English speaking world the term "library science" appeared in the early 1930s, in the title of S. R. Ranganathan's The Five Laws of Library Science, published in 1931, and in the title of Lee Pierce Butler's 1933 book, An introduction to library science (University of Chicago Press). Butler's new approach advocated research using quantitative methods and ideas in the social sciences with the aim of using librarianship to address society's information needs. This research agenda went against the more procedure-based approach of "library economy," which was mostly confined to practical problems in the administration of libraries. While Ranganathan's approach was philosophical it was tied more to the day-to-day business of running a library.

In more recent years, with the growth of digital technology, the field has been greatly influenced by information science concepts. Although a basic understanding is critical to both library research and practical work, the area of information science has remained largely distinct both in training and in research interests.

Most professional library jobs require a professional post-baccalaureate degree in library science, or one of its equivalent terms, library and information science as a basic credential. In the United States and Canada the certification usually comes from a master's degree granted by an ALA-accredited institution, so even non-scholarly librarians have an originally academic background. In the United Kingdom, however, there have been moves to broaden the entry requirements to professional library posts, such that qualifications in, or experience of, a number of other disciplines have become more acceptable. In Australia, a number of institutions offer degrees accepted by the ALIA (Australian Library and Information Association).

According to U.S. News & World Report, library and information science ranks as one of the "Best Careers of 2008."[2] The median annual salary for 2007 is reported as $51,400 USD in the United States,[3] with additional salary breakdowns available by metropolitan area, with San Francisco coming in the highest with an average salary of $64,400 and Philadelphia the lowest at $48,200.[3] This is up from the median salaries in 2006 as $49,060 reported by the U.S. Bureau of Labor Statistics. The increase can basically be attributed to keeping pace with inflation. A $49,060 salary in 2006 was adjusted to $50,457.33,[4] and while data is not yet posted for 2008, adding the same rate of inflationary increase for 2008 (1.028%) one could project an inflationary salary adjustment as $51,894.46 for the 2008 fiscal year.[5] In December of 2007, the BLS projected growth for the field at "4 percent between 2006 and 2016", which is "slower than the average for all occupations", because, its authors assert, "As electronic resources become more common and patrons and support staff become more familiar with their use, fewer librarians are needed to maintain and assist users with these resources."[6]

Subdisciplines of library science include the study of

Librarians in different types of libraries

The study of academic librarianship covers library services for colleges and universities. Issues of special importance to the field may include copyright; technology, digital libraries, and digital repositories; academic freedom; open access to scholarly works; as well as specialized knowledge of subject areas important to the institution and the relevant reference works.

The study of archives covers the training of archivists, librarians specially trained to maintain and build archives of records intended for historical preservation. Special issues include physical preservation of materials and mass deacidification; specialist catalogs; solo work; access; and appraisal. Many archivists are also trained historians specializing in the period covered by the archive.

Special librarians include almost any other form of librarianship, including those who serve in medical libraries (and hospitals or medical schools), corporations, news agency libraries, or other special collections. The issues at these libraries will be specific to the industries they inhabit, but may include solo work; corporate financing; specialized collection development; and extensive self-promotion to potential patrons.

On this basis, it has sometimes been proposed that LIS is distinct from librarianship, in a way analogous to the difference between medicine and doctoring. In this view, librarianship, the application of library science, would comprise the practical services rendered by librarians in their day-to-day attempts to meet the needs of library patrons.

Whether or not individual professional librarians contribute to scholarly research and publication, many are involved with and contribute to the advancement of the profession and of library science and information science through local, state, regional, national and international library or information organizations.

Other uses of these terms do not make the distinction and treat them as synonyms.

Powell's widely used introductory textbook does not make a formal distinction, but its bibliography uses the word librarianship as the heading for articles about the library profession.

Library science is very closely related to issues of knowledge organization, however the latter is a broader term which covers how knowledge is represented and stored (computer science/linguistics), how it might be automatically processed (artificial intelligence), and how it is organized outside the library in global systems such as the internet. In addition, Library science typically refers to a specific community engaged in managing holdings as they are found in university and government libraries, while knowledge organization in general refers to this and also to other communities (such as publishers) and other systems (such as the internet). The Library system is thus one socio-technical structure for knowledge organization [7]