From Nordan Symposia
(Redirected from Mediocre)
Jump to navigationJump to search 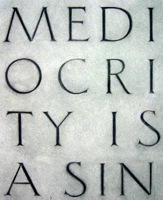 b : moderate ability or value

The mediocrity principle is the notion in philosophy of science that there is nothing very unusual about the evolution of our solar system, the Earth, any one nation, or humans. It is a heuristic in the vein of the Copernican principle, and is sometimes used as a philosophical statement about the place of humanity. Biologist and blogger PZ Myers believes this heuristic reminds us to look for general explanatory principles first, and only then pursue the exceptional details. The idea is to assume mediocrity, rather than starting with the assumption that a phenomenon is special or has somehow violated the laws of the universe.

The mediocrity, as the Copernican principle, states that life on Earth depends on just a few basic molecules, the elements that make up these molecules are (to a greater or lesser extent) common to all stars, and the laws of science we know apply to the entire universe (and there is no reason to assume that they do not). Given sufficient time, it seems reasonable to expect that life would originate somewhere, and has probably originated elsewhere in the cosmos. This idea is bolstered by Edwin Hubble's discovery that the universe is substantially larger than humans first thought. The Hubble Deep Field is a long exposure of thousands of galaxies, making it one of the best pictorial representations of the principle of mediocrity.]

The traditional formulation of the Copernican mediocrity principle is usually played out in the following way: Ancients of the Middle East and west once thought that the Earth was at the center of the universe, but Copernicus proposed that the Sun was at the center. In the 1930s, RJ Trumpler found that the solar system was not at the center of the Milky Way Galaxy (as Jacobus Kapteyn claimed), but 56% of the way out to the rim from the galaxy's core. In the mid-twentieth century, George Gamow (et al.) demonstrated that although it appears that our Galaxy is at the center of an expanding universe (in accordance with Hubble's law), every point in space could be experiencing the same phenomenon. And, at the end of the twentieth century, Geoff Marcy and colleagues discovered that extrasolar planets are quite common, putting to rest the idea that the Sun is unusual in having planets. In short, Copernican mediocrity is a series of astronomical findings that the Earth is a relatively ordinary planet orbiting a relatively ordinary star in a relatively ordinary galaxy which is one of countless others in a giant universe, possibly within an infinite multiverse.[1]