From Nordan Symposia
(Redirected from Meteors)
Jump to navigationJump to search 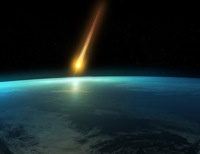 b : the streak of light produced by the passage of a meteor

A meteor is the visible streak of light that occurs when a meteoroid, a sand- to boulder-sized particle of debris in the Solar System, enters the Earth's atmosphere. Meteors typically occur in the mesosphere, and most range in altitude from 75 km to 100 km. Millions of meteors occur in the Earth's atmosphere every day. Most meteoroids that cause meteors are about the size of a pebble. They become visible between about 40 and 75 miles (65 and 120 kilometers) above the earth. They disintegrate at altitudes of 30 to 60 miles (50 to 95 kilometers). Meteors have roughly a fifty percent chance of a daylight (or near daylight) collision with the Earth as the Earth orbits in the direction of roughly west at noon. Most meteors are, however, observed at night as low light conditions allow fainter meteors to be observed.

For bodies with a size scale larger than the atmospheric mean free path (10 cm to several metres) the visibility is due to the atmospheric ram pressure (not friction) that heats the meteoroid so that it glows and creates a shining trail of gases and melted meteoroid particles. The gases include vaporized meteoroid material and atmospheric gases that heat up when the meteoroid passes through the atmosphere. Most meteors glow for about a second. A relatively small percentage of meteoroids hit the Earth's atmosphere and then pass out again: these are termed Earth-grazing fireballs.

Meteors may occur in showers, which arise when the Earth passes through a trail of debris left by a comet, or as "random" or "sporadic" meteors, not associated with a specific single cause. A number of specific meteors have been observed, largely by members of the public and largely by accident, but with enough detail that orbits of the incoming meteors or meteorites have been calculated. All of them came from orbits from the vicinity of the asteroid belt.[1]

A meteorite is a meteoroid (a solid piece of debris from such sources as asteroids or comets) originating in outer space that survives impact with the Earth's surface. A meteorite's size can range from small to extremely large. When a meteoroid enters the atmosphere, frictional pressure, and chemical interactions with the atmospheric gases cause the body to heat up and emit light, thus forming a fireball, also known as a meteor or shooting/falling star. The term bolide refers to either an extraterrestrial body that collides with the Earth, or to an exceptionally bright, fireball-like meteor regardless of whether it ultimately impacts the surface.

More generally, a meteorite on the surface of any celestial body is a natural object that has come from elsewhere in space. Meteorites have been found on the Moon and Mars. Meteorites that are recovered after being observed as they transited the atmosphere or impacted the Earth are called falls. All other meteorites are known as finds. As of February 2010, there are approximately 1,086 witnessed falls having specimens in the world's collections. In contrast, there are more than 38,660 well-documented meteorite finds.

Meteorites have traditionally been divided into three broad categories: stony meteorites are rocks, mainly composed of silicate minerals; iron meteorites are largely composed of metallic iron-nickel; and, stony-iron meteorites contain large amounts of both metallic and rocky material. Modern classification schemes divide meteorites into groups according to their structure, chemical and isotopic composition and mineralogy. Meteorites smaller than 2mm are classified as micrometeorites.