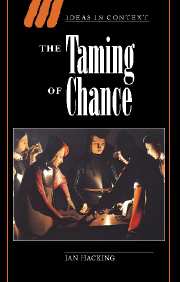 The ancients had two concepts of chance, both causes of effects that happen incidentally, but differentiated in the second book of Aristotle's Physics as follows:

To many earlier Greek philosophers chance did not exist. One of the surviving fragments of Leucippus says: "Nothing occurs at random, but everything for a reason and by necessity". To the atomists the world was completely deterministic. However, Democritus also claimed that chance (automaton) caused the original creation of "the heavenly spheres and all the worlds", i.e. that existence itself has no prior or determining cause, although everything that has happened since is deterministic. To Aristotle on the other hand, both tyche (luck) and automaton (chance) are everyday phenomena. However, for Aristotle chance events were not uncaused, they were simply the effect of the concurrence of two causal sequences. Thus a stone falling that happens to hit a tree is a chance event, although the falling of the stone and the growing of the tree are both determined events.

For lessons on the topic of Chance, follow this link.

Contingency is a conditional response plan made in preparation for various future circumstances including the unanticipated.

Randomness is a concept with somewhat disparate meanings in several fields. It also has a common meaning which has a loose connection with some of those more definite meanings. Informally, it is typically used to denote a lack of order, or purpose, or cause[citation needed]. In addition more closely connected with the concept of entropy, there is the sense of lack of predictability.

Randomness, as defined by Aristotle, is the situation when a choice is to be made which has no logical component by which to determine or make the choice (see Buridan's ass). More recently, and more formally, a random process is a repeating process whose outcomes follow no describable deterministic pattern, but follow a probability distribution, such that the relative probability of the occurrence of each outcome can be approximated or calculated. For instance, the rolling of a six-sided die in neutral conditions may be said to produce random results in that one cannot compute before a roll what digit will be landed on, but the probability of landing on any of the six rollable digits can be calculated because of the finite cardinality of the set of possible outcomes.

The term is often used in statistics to signify well-defined statistical properties, such as a lack of bias or correlation. Monte Carlo Methods, which rely on random input, are important techniques in science, as, for instance, computational science.[1] Random selection is an official method to resolve tied elections in some jurisdictions[2] and is even an ancient method of divination, as in tarot, the I Ching, and bibliomancy. Its use in politics is very old, as office holders in Ancient Athens were chosen by lot, there being no voting.

Humankind has been concerned with random physical processes since pre-historic times. Examples are divination (cleromancy, reading messages in casting lots), the use of allotment in the Athenian democracy, and the frequent references to the casting of lots found in the Old Testament.

Despite the prevalence of gambling in all times and cultures, for a long time, there was little inquiry into the subject. Though Gerolamo Cardano and Galileo wrote about games of chance, the first mathematical treatments were given by Blaise Pascal, Pierre de Fermat and Christiaan Huygens. The classical version of probability theory that they developed proceeds from the assumption that outcomes of random processes are equally likely; thus they were among the first to give a definition of randomness in statistical terms. The concept of statistical randomness was later developed into the concept of information entropy in information theory.

In the early 1960s, Gregory Chaitin, Andrey Kolmogorov and Ray Solomonoff introduced the notion of algorithmic randomness, in which the randomness of a sequence depends on whether it is possible to compress it.

Randomness, as opposed to unpredictability, is held to be an objective property (determinists believe it is an objective fact that randomness does not in fact exist). Nevertheless, what appears random to one observer may not appear random to another observer. Consider two observers of a sequence of bits, only one of whom has the cryptographic key needed to turn the sequence of bits into a readable message. The message is not random, but is unpredictable for one of the observers.

One of the intriguing aspects of random processes is that it is hard to know whether the process is truly random. The observer can always suspect that there is some "key" that unlocks the message. This is one of the foundations of superstition and is also what is a driving motive, curiosity, for discovery in science and mathematics.

Under the cosmological hypothesis of determinism, there is no randomness in the universe, only unpredictability, since there is only one possible outcome to all events in the universe. A follower of the narrow frequency interpretation of probability could assert that no event under determinism can be defined as having probability, since there is only one universal outcome. On the other hand under the rival Bayesian interpretation of probability there is no objection to the use of probabilities to consistently represent personal lack of complete knowledge of outcomes.

Chaotic systems are unpredictable in practice due to their extreme dependence on initial conditions. Whether or not they are unpredictable in terms of computability theory is a subject of current research. At least in some disciplines of computability theory, the notion of randomness turns out to be identified with computational unpredictability. Events that are random individually can still be can often be precisely characterized en masse, usually in terms of probability or expected value. For instance, quantum mechanics allows a very precise calculation of the half-lives of atoms even though the process of atomic decay is a random one. More simply, although we cannot predict the outcome of a single toss of a fair coin, we can characterize its general behavior by saying that if a large number of tosses are made, roughly half of them will show up heads. Ohm's law and the kinetic theory of gases are precise characterizations of macroscopic phenomena which are random on the microscopic level.

Some theologians have attempted to resolve the apparent contradiction between an omniscient deity, or a first cause, and free will using randomness. Discordians have a strong belief in randomness and unpredictability. Buddhist philosophy states that any event is the result of previous events (karma), and as such, there is no such thing as a random event or a first event.

Martin Luther, the forefather of Protestantism, believed that there was nothing random based on his understanding of the Bible. As an outcome of his understanding of randomness, he strongly felt that free will was limited to low-level decision making by humans. Therefore, when someone sins against another, decision making is only limited to how one responds, preferably through forgiveness and loving actions. He believed, based on Biblical scripture, that humans cannot will themselves faith, salvation, sanctification, or other gifts from God. Additionally, the best people could do, according to his understanding, was not sin, but they fall short, and free will cannot achieve this objective. Thus, in his view, absolute free will and unbounded randomness are severely limited to the point that behaviors may even be patterned or ordered and not random. This is a point emphasized by the field of behavioral psychology.

These notions and more in Christianity often lend to a highly deterministic worldview and that the concept of random events is not possible. Especially, if purpose is part of this universe, then randomness, by definition, is not possible. This is also one of the rationales for religious opposition to evolution, where, according to theory, (non-random) selection is applied to the results of random genetic variation.

Donald Knuth, a Stanford computer scientist and Christian commentator, remarks that he finds pseudorandom numbers useful and applies them with purpose. He then extends this thought to God who may use randomness with purpose to allow free will to certain degrees. Knuth believes that God is interested in people's decisions and limited free will allows a certain degree of decision making. Knuth, based on his understanding of quantum computing and entanglement, comments that God exerts dynamic control over the world without violating any laws of physics, suggesting that what appears to be random to humans may not, in fact, be so random.[5]

C. S. Lewis, a 20th-century Christian philosopher, discussed free will at length. On the matter of human will, Lewis wrote: "God willed the free will of men and angels in spite of His knowledge that it could lead in some cases to sin and thence to suffering: i.e., He thought freedom worth creating even at that price." In his radio broadcast, Lewis indicated that God "gave [humans] free will. He gave them free will because a world of mere automata could never love..."

In some contexts, procedures that are commonly perceived as randomizers—drawing lots or the like —are used for divination, e.g., to reveal the will of the gods.