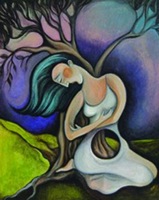 Miscarriage or spontaneous abortion is the spontaneous end of a pregnancy at a stage where the embryo or fetus is incapable of surviving, generally defined in humans at prior to 20 weeks of gestation. Miscarriage is the most common complication of early pregnancy.

For lessons on the related topic of Abortion, follow this link.

In medical contexts, the word "abortion" refers to any process by which a pregnancy ends with the death and removal or expulsion of the fetus, regardless of whether it is spontaneous or intentionally induced. Many women who have had miscarriages, however, object to the term "abortion" in connection with their experience, as it is generally associated with induced abortions. In recent years there has been discussion in the medical community about avoiding the use of this term in favor of the less ambiguous term "miscarriage".

Labour resulting in live birth before the 37th week of pregnancy is termed "premature birth", even if the infant dies shortly afterward. The limit of viability at which 50% of fetus/infants survive longterm is around 24 weeks, with moderate or major neurological disability dropping to 50% only by 26 weeks. Although long-term survival has never been reported for infants born from pregnancy shorter than 21 weeks and 5 days, infants born as early as the 16th week of pregnancy may sometimes live for some minutes after birth.

A fetus that dies while in the uterus after about the 20–24th week of pregnancy is termed a "stillbirth"; the precise gestational age definition varies by country. Premature births or stillbirths are not generally considered miscarriages, though usage of the terms and causes of these events may overlap.