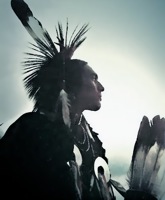 Middle English natif, from Middle French, from Latin nativus, from natus, past participle of nasci to be born

b : living or growing naturally in a particular region : indigenous

b : found in nature especially in an unadulterated form <mining native silver>

The term native can have many different social and political connotations, in different contexts. In some cases it is a neutral, descriptive term - as in stating that one is a native of a particular city or that a certain language is one's native language. However, in the context of colonialism - in particular, British colonialism - the term "natives", as applied to the inhabitants of colonies, assumed a disparaging and patronising sense, implying that the people concerned were incapable of taking care of themselves and in need of Europeans to administer their lives; therefore, these people resent the use of the term and consider it insulting, and at present Europeans usually avoid using it. Likewise, American Indians under the auspices of the American Indian movement loathe this term. Native American in the U.S. was a term first coined by the U.S. Census as a way to classify all American Indian tribes. And in the context of Nativism, in some periods a potent political force, "natives" are defined as a (predominantly white) group deserving of a special privileged position in comparison to immigrants.[1]