From Nordan Symposia
(Redirected from Nervous)
Jump to navigationJump to search 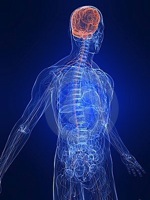 The nervous system is a network of specialized cells that coordinate the actions of an animal and send signals from one part of its body to another. These cells send signals either as electrochemical waves traveling along thin fibers called axons, or as chemicals released onto other cells. The nervous system is composed of neurons and other specialized cells called glial cells (plural form glia).

At the most fundamental level, the function of the nervous system is to send signals from one part of the body to another. There are two basic ways that a cell can send signals to cells in other parts of the body. The simplest is by releasing chemicals called hormones into the internal circulation, so that they can diffuse to distant sites. In contrast to this "broadcast" mode of signaling, the nervous system provides "point-to-point" signals—neurons project their axons to specific target areas and make synaptic connections with specific target cells. Thus, neural signaling is in principle capable of a much higher level of precision than hormonal signaling. It is also much faster: the fastest nerve signals travel at speeds that can exceed 100 meters per second.