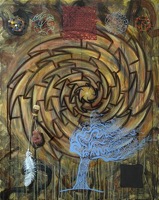 Nonresistance (or non-resistance) is a philosophy and strategy for social change that discourages physical resistance to an enemy. It is considered as a subdivision of nonviolence. Practitioners of nonresistance may refuse to retaliate against an opponent or offer any form of self-defense. In the modern times, this has been used as a tool for social protest. A well known example is the nonviolent resistance movement led by Mohandas Gandhi in the struggle for Indian Independence.

For lessons on the topic of Nonresistance, follow this link.

Perhaps the oldest recorded statement of nonresistance philosophy is that of Socrates around 399 BC. An influential ancient Greek philosopher, Socrates was sentenced to death by the Athenian democracy for teaching his students to question authority and think for themselves. Socrates accepted his fate on reasons of morality and justice, rather than accept help from his supporters to flee Athens and escape execution. There are few if any other accounts of nonresistance which have been so influential throughout the history of the Western world.

The term nonresistance was later used to refer to the Established Church during the religious troubles in England following the English Civil War and Protestant Succession. In the Anabaptist churches, the term is defined in contrast with pacifism. Advocates of non-resistance view pacifism as a more liberal theology since it advocates only physical nonviolence and allows its followers to actively oppose an enemy. In the 20th century, there has been differences of opinion between and within Amish and Mennonite churches, as they disagreed on the ethics of nonresistance and pacifism.

Leo Tolstoy, Adin Ballou and Mohandas Gandhi were notable advocates of nonresistance. However, Gandhi's Satyagraha movement did not believe in using non-resistance as an alternative to cowardice. 'I do believe,' he wrote, 'that where there is only a choice between cowardice and violence, I would advise violence.'"[1]

Christian nonresistance is based on a reading of the Sermon on the Mount, in which Jesus says, :"But I tell you, do not resist an evil person. If someone strikes you on the right cheek, turn to him the other also... Love your enemies and pray for those who persecute you ...".[2]

Members of the Anabaptist (Mennonite, Amish, Hutterite and Schwarzenau Brethren/German Baptist) denominations and other peace churches like the Quakers have interpreted this passage to mean that Christians should do nothing to physically resist an enemy. According to this belief, only God has the right to execute punishments. Non-resistance Christians note that sacrificial love of Jesus resulted in his submission to crucifixion rather than vengeance.