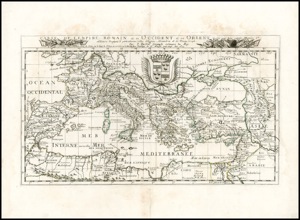 The Western world, also known as the West and the Occident (from Latin: occidens "sunset, west"; as contrasted with the Orient), is a term that can have multiple meanings depending on its context (e.g., the time period, the region or social situation). Accordingly, the basic definition of what constitutes "the West" varies, expanding and contracting over time, in relation to various historical circumstances. Ideally, each nation as it exists today should determine if they are a part of this classification instead of this being judged by outside individuals. Each nation has distinct peoples, languages, and influences.

The concept of the Western world has its roots in Greco-Roman civilization in Europe, the advent of Christianity, and the Great Schism in the 11th Century which divided the religion into Eastern and Western halves. In the modern era, Western culture has been heavily influenced by the traditions of The Renaissance and The Enlightenment, and shaped by expansive colonialism in the 18th-19th Century. Its political usage was temporarily informed by mutual antagonism with the Soviet bloc during the Cold War in the mid to late 20th Century. In the contemporary political and cultural context, the Western World generally refers to the nations of the Americas, Europe, Australia, New Zealand, Israel, and South Africa.

The consensus is that the West originated with ancient Greece and ancient Rome. Over time, their associated empires grew first to the east and south, conquering and absorbing many older great civilizations of the ancient Near East; later, they grew to the north and west to include Western Europe.

Other historians, such as Carroll Quigley (Evolution of Civilizations), contend that Western Civilization was born around 400 AD, after the total collapse of the Western Roman Empire, leaving a vacuum for new ideas to flourish that were impossible in Classical societies. In either view, between the fall of the Western Roman Empire and the Renaissance, the West experienced a period of considerable decline, known as the Middle Ages, which include the Dark Ages and the Crusades.

The knowledge of the ancient Western world was partly preserved during this period due to the survival of the Eastern Roman Empire; it was also greatly expanded by the Arab World, and mostly by the concurrent ascendency of the Islamic Golden Age. The Arab importation of both the Ancient and new technology from the Middle East and the Orient to Renaissance Europe represented “one of the largest technology transfers in world history.”[5][6]

Since the Renaissance, the West evolved beyond the influence of the ancient Greeks and Romans and the Islamic world due to the Commercial, Scientific, and Industrial Revolutions, and the expansion of the Christian peoples of Western European empires, and particularly the globe-spanning empires of the eighteenth and nineteenth centuries. Since the Age of Discovery and Columbus, the notion of the West expanded to include the Americas, though much of the Americas have considerable pre-Western cultural influence. Australia, New Zealand and most countries of Latin America are considered part of Western culture due to their former status as settler colonies of Western Christian nations. Generally speaking, the current consensus would locate the West, at the very least, in the cultures and peoples of Europe, North America (namely Canada, U.S., and Mexico), Australia, New Zealand and most countries in South America. There is debate among some as to whether Eastern Europe is in a category of its own. Culturally Eastern Europe is usually more or less accepted into the 'West', mainly because of its geographic location in what is mostly Europe (and cultural ties). However, it does not fill the traditional economic and living-standard criteria typically associated with "The West".[1]