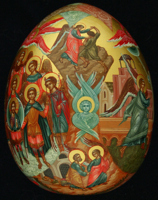 2 capitalized : of, relating to, or constituting any of various conservative religious or political groups: as a : Eastern Orthodox

b : of or relating to Orthodox Judaism

The word orthodox, from Greek orthodoxos "having the right opinion", from orthos ("right", "true", "straight") + doxa ("opinion" or "praise", related to dokein, "to think"), is typically used to mean the adherence to well-researched and well-thought-out accepted norms, especially in religion.

The term did not conventionally exist with any degree of formality (in the sense in which it is now used) prior to the advent of Christianity in the Greek-speaking world, though the word does occasionally show up in ancient literature in other, somewhat similar contexts. Orthodoxy is opposed to heterodoxy ("other teaching"), heresy and schism. People who deviate from orthodoxy by professing a doctrine considered to be false are most often called heretics or radicals, while those who deviate from orthodoxy by removing themselves from the perceived body of believers are called schismatics. The distinction in terminology pertains to the subject matter; if one is addressing corporate unity, the emphasis may be on schism; if one is addressing doctrinal coherence, the emphasis may be on heresy.

Apostasy, for example, is a violation of orthodoxy that takes the form of abandonment of the faith, a concept largely unknown before the adoption of Christianity as the state religion of Rome on February 27, 380 by Theodosius I, see also First seven Ecumenical Councils. A lighter deviation from orthodoxy than heresy is commonly called error, in the sense of not being grave enough to cause total estrangement, while yet seriously affecting communion. Sometimes error is also used to cover both full heresies and minor errors.

The concept of orthodoxy is the most prevalent in many forms of organized monotheism, but orthodox belief is not usually overly emphasized in polytheistic or animist religions. Often there is little to no concept of dogma, and varied interpretation of doctrine and theology is tolerated and sometimes even encouraged within certain contexts. Syncretism, for example, plays a much wider role in non-monotheistic (and particularly, non-scriptual) religion. The prevailing governing idea within polytheism is most often orthopraxy ("right practice") rather than "right belief".