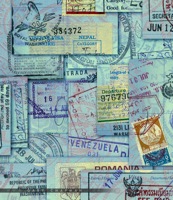 b : a license issued by a country permitting a foreign citizen to pass or take goods through its territory : safe-conduct
c : a document of identification required by law to be carried by persons residing or traveling within a country

b : something that secures admission, acceptance, or attainment <education as a passport to success>

A passport is a document, issued by a national government, which certifies, for the purpose of international travel, the identity and nationality of its holder. The elements of identity are name, date of birth, sex, and place of birth. Most often, nationality and citizenship are congruent.