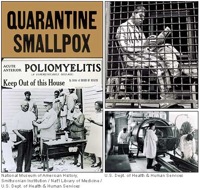 b : a regulation placing a ship in quarantine
c : a place where a ship is detained during quarantine

b : a place in which those under quarantine are kept

The quarantining of people often raises questions of civil rights, especially in cases of long confinement or segregation from society, such as that of Mary Mallon (aka Typhoid Mary), a typhoid fever carrier who spent the last 24 years of her life under quarantine.

Quarantine periods can be very short, such as in the case of a suspected anthrax attack, in which persons are allowed to leave as soon as they shed their potentially contaminated garments and undergo a decontamination shower. For example, an article entitled "Daily News workers quarantined" describes a brief quarantine that lasted until people could be showered in a decontamination tent.

The February/March 2003 issue of HazMat Magazine suggests that people be "locked in a room until proper decon could be performed", in the event of "suspect anthrax".

Civil rights activists in some cases have objected to people being rounded up, stripped and showered against their will. But Capt. Chmiel said local health authorities have "certain powers to quarantine people."

The first astronauts to visit the Moon were quarantined upon their return at the specially built Lunar Receiving Laboratory.

New developments for quarantine include new concepts in quarantine vehicles such as the Ambulance bus, mobile hospitals, and lockdown/invacuation (inverse evacuation) procedures, as well as docking stations for an ambulance bus to dock to a facility that's under lockdown.